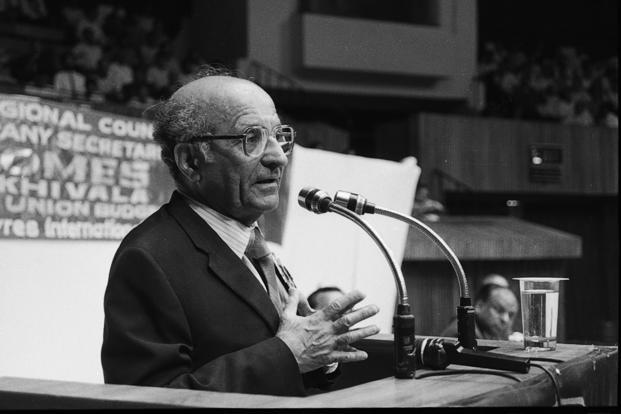 In the sensational waves of contemporary debates on the economy, constitution, and facets of liberal democracy, the common threads invariably cut through these fields are rarely packed with thoughts of eminent liberal thinkers like Nani Palkhivala who was one of the greatest sons of twentieth-century India. He was duly credited with many hats to his long and eventful public life with lasting immersions on the people and intellectuals of the country. His life and works have become one such rare embodiment which needs to be reminded for future generations. Alas, the regional media in India does not bother about the contributions of great thinkers like Nani.

Nani Palkhivala’s contributions to the issues of the Indian economy, constitutionalism, and liberal democracy were immensely obliging to the advancement of the Indian subcontinent in the last seventy years. In the second half of the last century, his legacy was unparalleled to none in the above fields. Moreover, his adherence to the ethical values and liberal principles were more than just guiding forces behind his most illustrated public life. He was deeply rooted and a believer in dharma which encompasses as vast as humanity. Nani Palkhivala was a firm believer in individual liberties, free enterprise, responsible government, economic freedom, constitutional morality, and private property rights.

This year marks the 100th Birth Anniversary of Nani Ardeshir Palkhivala who was born on 16th January 1920 in Bombay (now Mumbai). He was called Nanabhoy by his parents and Nani Palkhivala or Nani by most others. His family was a humble working class. He completed his school and higher education in Bombay: School education was at Masters Tutorial High School, Masters Degree in English Literature was at St Xavier College in 1942 and a Law Degree in Government Law College was in 1943. He excelled in academic education despite suffering from a dreadful stammer.

Nani Palkhivala became a household name in India for many reasons. He was a prolific writer and orator on many subjects’ especially economic policies, the constitution of India, civil liberties, and fundamental rights of citizens. He also became a Statesman and Ambassador of the USA during the period 1977-79. Many legal luminaries termed him as a rare personality, the living legend, a revered authority of Law and Practice for several decades. He has written numerous books on Tax systems which were sought after even globally. Liberal scholar and Statesman C Rajagopalachari or Rajaji hailed highly that Nani Palkhivala was a country’s gifted liberal legal pundit who saved the Indian democracy from the government’s tyranny of absolute power to amend the constitution’s basic structure.

Nani Palkhivala’s areas of interest in professional public life varied from being a legal expert, academician, and practitioner of constitutional law, and economic policy, literature, poetry to a Statesman who fought for India’s historical cases, individual liberty, private property right, and civil liberties for the poorest of poor peoples’ interests. He is known for winning many legal battles in the interest of citizens’ fundamental rights and economic freedom for free enterprises. He was witness to the best and worst of the country’s odd events that happened soon after the independence and a Republic with the adoption of the Constitution of India.

What made him become a more vocal critic of the government policies and of the ideas behind those policies was the dogmatic thought process which prevailed at that time and was neither rooted in Indian traditions nor convincing with facts and truths of sound logic and reasoning. Hence, much before the political discourse on the economic reforms of the 1990s, Nani Palkhivala had strongly advocated since 1958 that the Indian economy which was wedded to the idea of socialist, command and control model ought to fail sooner or later.

Nani Palkhivala launched a forum to demystify the policies of the government to educate the citizens. He was termed as peoples’ Finance Minister without Portfolio in the Cabinet of India’s Republic! In 1958, he had initiated a public speech in a small hotel room in Bombay to demystify the jargon of Budget of Union Government to citizens in plain language with alternative sound policy solutions to the issues and challenges faced by the country. In the annual post-budget speech organised by Forum for Free Enterprises, Bombay, the audience rose from the tiny size in a hotel room to more than a lakh people in 1994 in open places in Bombay, Delhi, and Calcutta. His eloquent extempore post-budget speeches were much watch-out for the senses and nonsense of the budget announcements filled with humility and always delivered without a single piece of paper for a couple of hours.

Among his writings and speeches, two books are widely known for its relevance for decades. The “We, the People” book was published in 1984, with some of his most important speeches and writings over three decades including some of his post-Union Budget analysis. Another book he published in 1994 was “We, the Nation”, which is a companion volume to “We, the People” also has some of his best speeches and writings on different issues and challenges faced by the Indian economy and society at large.

The following are some of his other works which are must-read for all those who wanted to understand the mainstream debate on the Republic of India and its economy and people in the decades prior to major economic reforms of 1990s: The Global Economy, a North-South Dialogue, 1984: Where the North Meets the South, Imperatives for Development in the Global Economy (1985), The People, the Only Keepers of Freedom (1979), The Constitution and the Common Man (1971), India’s Priceless Heritage (1980), Our Constitution Defaced and Defiled (1974), The Highest Taxed Nation (1965), Essential Unity of All Religions (1990) and his magnum opus, The Law and Practice of Income Tax (1950).

In the interest of promoting free-market economic principles, Nani Palkhivala served on several forums and organizations to take the new ideas and sound policies to the people. During the period, 1968-2000, he was President of Forum for Free Enterprises, Bombay and delivered the famous post Union Budget speeches and published numerous essays on affairs of economics, liberal democracy, public finances, taxation, etc.

Interestingly, recently, it was found that Rajaji wrote a letter (dated 27 June 1971) to Nani Palkhivala with a request to be the President of Swatantra Party which was founded in 1959 as the major opposition to Nehru’s Congress government. But Nani replied (on 9 July 1971) with “I find it very painful to say No to a man whom I hold in such high esteem” on the ground of “remaining an independent person outside politics”.

To advance the liberal democracy in India towards a more prosperous country for all citizens, we have to remember and foster the following Five Doctrines of Nani Palkhivala (From February 1971 Issue of Freedom First Magazine):

In his entire public life, he always fought for improving the standard of living for poor people, bringing more effective and responsible governments. Nani Palkhivala died on 11 December 2002 in Mumbai at the age of 82. He had unquenchable confidence in the long-term future of India and its young people. Therefore, the current generation of millennials needs to learn about the works of this liberal scholar and statesman for becoming a truly responsible citizen and lead an exemplary life with works ethics in public.