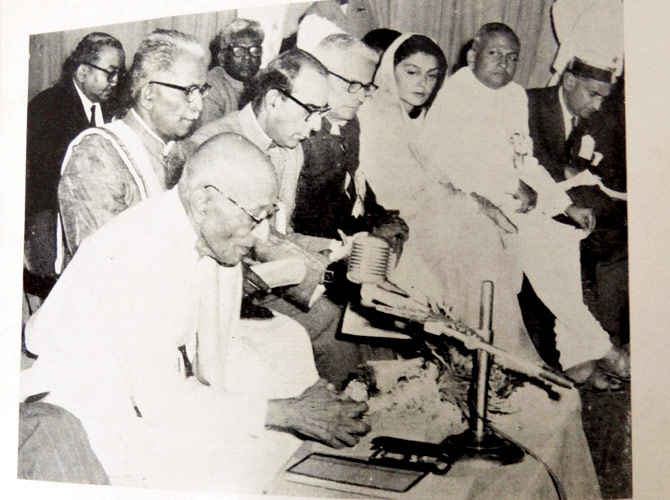 The recent revival of the Swatantra Party in the public discourse has mostly been focused on its economic liberalism agenda. The underlying driving factor, of course, is the Indian market liberals’ search for the Indian roots of liberalism. Also reflected in the Indian neoliberal writings on the Swatantra is a wishful tendency to see a viable political home in the Swatantra party, if only it had managed to survive the Indira onslaught in the early 1970s. Of course, the Swatantra’s economic and foreign policy positions have been vindicated and in that sense, the party could claim victory, if only posthumously. Also, in contrast to the earlier dismissive attitude towards the Swatantra policy as a mere pro-business agenda, recent writings have brought more nuance to the debate about economic and even foreign policy elements of the Swatantra vision. However, what has been absent in the current discourse about the Swatantra is its interest/identity aggregation function.

It is true that under the intellectual leadership of Minoo Masani, the party espoused a classic liberal agenda. But it also operated as a broad tent secular, conservative coalition of social groups. These groups included the business class, middle peasants and proprietors, conservative ex-Congressmen, former administrators, princely rulers, free-market liberals, and cultural conservatives. What enabled this coalition of disparate groups was the Nehruvian Congress’ grip over political power which effectively turned India into one-party democracy and a radical left drift in economic policy. Minoo Masani was arduously trying to stitch together a political platform to challenge Nehruvian socialism for some time. The immediate trigger was provided by the Nagpur Congress resolution which stoked the fears of Soviet-style farm collectivization. The disparate dissidents this time hobbled together and the Swatantra was born.

As Howard Erdman argued, the core inner group of the Swatantra leaders reflected three ideological streams- self-sufficient village conservatism, cultural nationalism, and industrial capitalism. This core group consisted of Rajaji, Minoo Masani, N G Ranga, K M Munshi, and a less active Homi Mody. Rajaji was a veteran Gandhi disciple turned dissident Congressman who had earlier served as the Chief Minister of Madras and the Home Minister of India. Ranga was an Oxford-educated Andhra peasant leader with a rather proficient party-hopping tendency. Educated at the London School of Economics, Masani participated in the Indian nationalist movement and founded the Congress Socialist Party only to be disillusioned with the left politics.

Munshi was a freedom fighter, leading cultural nationalist, an architect of the Indian constitution, and an entrepreneurial revivalist of Hindu civilizational heritage reflected notably in the Bharatiya Vidya Bhavan initiative. Homi Mody was a leading voice of the Bombay business community with significant experience of local self-governance in the Bombay municipality. Notables among the aristocrats included Maharani Gayatri Devi, Raja Kamakhya Narain Singh of Ramgarh who controlled a significant vote bank in the tribal Bihar, and Maharaja of Kalahandi whose Ganatantra Parishad imitated Tory democrats.

Rajaji is regarded as a leading Indian conservative figure and rightly so. In his writings, the Gandhian skepticism towards the destabilizing and degrading impact of the industrial urban landscape is often reflected. His defense of social stability against creative destruction brought by industrial capitalism made him a traditionalist seeking to unwittingly preserve the caste system. The charge was made explicitly against him when he sought to introduce a hereditary skill-based training program in Madras’ schools. However, it is my sense that as Rajaji turned to the political battleground with an anti-statist agenda, his writings reflected a classic liberal turn that favored individualism and market forces. The anti-industrial attitude though was also shared by Ranga who was opposed to large-scale factories for its impact on artisans. With his rather unusual form of leftist populism, Ranga stood for peasant proprietorship against both feudal landlordism and state collectivization of farms.

Mody, in sharp contrast, was one of the most influential voices of the business community and had been proactive in negotiations from the side of the community. His closeness to the business establishment probably led to his appointment as the party treasurer. Masani by then had adopted a classical liberal worldview with all its emphasis on individualism, free market, strong civil society, and a limited state. In terms of economic policy, he was critical of Nehru’s statism and advocated economic freedom for farmers, industrialists, and consumers. He would cite the likes of Milton Friedman and Friedrich Hayek in his writings. Moreover, in the Indian context, he was close to the economist B R Shenoy and would receive his advice on economic matters.

In cultural terms, Rajaji again was a conservative sans communal leaning, rooted in the Hindu civilizational worldview. Biographer Rajmohan Gandhi dubbed him ‘as unabashed a Hindu as a defender of Muslim rights’. Apart from authoring a very popular telling of the Hindu epic Mahabharata, Rajaji also talked about the spiritualization of politics. In his view of progress driven by the restoration of culture and spirituality, Rajaji came closer to Munshi. Social institutions like jati, joint family, and village were seen by him as the pillars of Indian society serving the function of a welfare state of sorts. Rajaji’s spiritualized Hinduism though was no bar to progress and modernization. In many of his actions and speech-act, as Erdman noted, Rajaji reflected a Burkean acceptance of gradual progress. Munshi shared Rajaji’s belief in the relevance of Hindu cultural values but the similarity also went with differences. He certainly held more strong views on territorial nationalism than Rajaji and favored a strong centralized state. It is plausible that his views stemmed from the prevalent context of communal mobilization and partition-induced violence. For the same reason, he also wanted to ban religious outfits’ involvement in politics. Like many right-wing nationalists of today, Munshi deplored ‘minorityism’ and linguistic assertions. In contrast to the ‘unity in diversity’ vision of Indian nationalism, he preferred a strong sense of Indian national identity overriding other forms of identity. Moreover, his concern for Hindu unity led him to advocate social reforms and deplore the orthodoxy which defended the caste order.

In sharp contrast to Rajaji and Munshi, Masani was a secular, westernized, and modern Parsi. Reflective of Masani’s credential was the remark by political scientist Morris-Jones that no person prominent in Indian public life today is more unambiguously modernist than Masani.

The discussion above captures the ideological diversity of the core Swatantra leadership in economic and cultural domains. However, not only did the Swatantra harbor a range of ideological positions, but it also had to deal with contending interest groups across provinces. Thus, the classic liberal, free-market agenda was part of a broad secular and conservative platform. Given the formidable political opposition from a statist left, it only made sense for market liberals like Masani to ally with traditionalists and democratic aristocrats. In fact, the fight against Congress hegemony led the Swatantra to enter into a grand alliance with the Jan Sangh and others. In the current context, the Swatantra lesson on coalition building to fight the ideological and electoral hegemony of a single party should be clear for political actors in India.

Read more: SO Musings: Bread and Circuses – The Welfare State