Home Essays Masani, Rajaji and Shenoy — the free-market troika that challenged the Nehruvian... 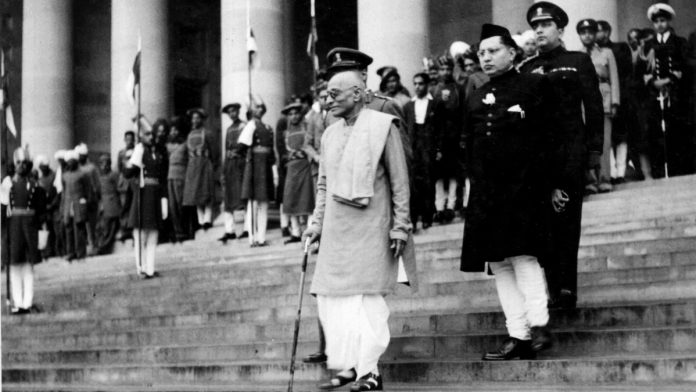 The domination of the Nehruvian consensus in the early years of the Indian republic is a fact well-known. It is not as if the critics of the Nehruvian vision did not exist, but their challenge remained limited and ineffectual, in both ideological and electoral domain. In the domain of economic policy, the fundamental critique of the Nehruvian mixed economy model came from the free-market camp coalesced in the Swatantra Party.

The free-market challenge to the Nehruvian State was unique in the sense that while the organisational structure underpinning the ideology crumbled under the populist wave unleashed by Indira Gandhi in the early 1970s, the ideas themselves survived only to be implemented after the 1991 liberalisation.

However, this Indian tradition of free-market ideology that could underpin and legitimise the economic liberalisation drive has been neglected today due to two reasons. One, the lack of knowledge about the Indian free-market tradition partly owes to the early demise of the Swatantra Party, along with a shrunken liberal space in the Indian public discourse. The second cause relates to the politics of knowledge production as the largely Leftist tilt of the Indian academia translates into a tendency to analyse the political economy in terms of class interests, not ideological imperatives.

New research on the Swatantra ideology

In this regard, a new paper by historian Aditya Balasubramanian on India’s free-market tradition seeks to fill the void. The paper mainly engages with the economic ideas of three public figures who led the charge against the Nehruvian mixed economy — Minoo Masani, Chakravarti Rajagopalachari or Rajaji as popularly known, and Bellikoth Raghunath Shenoy. Masani and Rajaji were the founding members of the Swatantra Party. Shenoy, the economist, was not a member of the party but advised both Masani and Rajaji on economic policy matters. Together, they formed what could be called the ‘Swatantra consensus’.Aditya Balasubramanian’s paper situates these thinkers in the transnational public sphere where Cold War superpowers were vying for control over hearts and minds. Much of the recent nostalgic commemoration of the Swatantra Party has focused on its economic liberalisation agenda as a bulwark against the ‘licence-permit raj’. However, Balasubramanian’s novel contribution lies in highlighting the political element of the Swatantra dissent against the single-party hegemony of the Congress. Also, the paper shows how the characterisation of India as a neutral ground in the Cold war could be contested on the basis of the initiatives undertaken by Indian liberals in coordination with the Western anti-Communist forces. The Communist manoeuvres in the Indian public sphere during the Cold War have already been revealed in the famous Mitrokhin archive papers.

In an otherwise brilliant paper by Aditya Balasubramanian on the Indian free-market tradition, it is the conceptual formulation of economic conservatism that warrants critical scrutiny and juxtaposition with an alternate reading of the ‘Swatantra consensus’. For instance, in calling Masani a conservative for his advocacy of lower taxation and less strident government regulation, which supposedly served the interest of the privileged big businesses, Balasubramanian reproduces the now-tiresome Leftist cliché.

In response to such an interest-based argument, one can point out that Masani saw peasant proprietors and urban middle-class, and not the big businesses, as the core constituencies of his party. He further criticised political brokers and big businesses who worked in cahoots to corner gains under the protectionist framework of Nehruvian planning.

Also, ironical as it may seem in light of Balasubramanian’s charge, the big businesses did not necessarily see Masani as their own. G.D. Birla, for instance, declared “Swatantra politics were not good businessman’s politics”. In his study of business and politics in India, Stanley Kochanek pointed out the lack of financial support for the Swatantra Party even from the business houses that were sympathetic to its ideological programme. Political scientist Howard Erdman’s study also concluded that “No one who has seen the party’s financial records would conclude that it was generously supported by India’s richest men”. In fact, if defending the interest of big businesses would make someone a conservative, one could rhetorically argue that it was the Nehruvian State that was conservative in its protectionist policy.

The charge of Masani’s relational conservatism in a post-colonial environment, dominated by socialist political groups, could also be overturned by positing Masani’s free-market liberalism as a relatively radical dissent against the prevalent statist consensus in both India and around the globe.

In order to show that Masani is a conservative, the paper also situates him in a transnational public sphere where many American conservatives appropriated liberal tenets in their anti-Communist posturing. However, in his numerous writings, Masani clearly self-identified as a liberal (not a conservative) and advocated classic liberal principles. In an interview in 1979, he made his ideological conviction as clear as possible: “Rajaji was conservative and I was Liberal.” As Howard Erdman has pointed out, the contemporary Western discourse saw Swatantra as a classic liberal party due to an excessive focus on its formal ideology, which was mostly the brainchild of Masani.

Masani himself took umbrage to the application of the label ‘conservative’ to the likes of Milton Friedman in the Western media. As an aside, this semantic confusion could be attributed to both the expansion of the meaning of liberalism in the early 20th century and the appropriation of classic liberal ideas by conservatives in the mid-20th century. Masani, though, was influenced not only by conservative James Burnham’s The Managerial Revolution but also by Hayek’s Road to Serfdom and Wilsonian liberal internationalism. He participated in the post-war liberal international order as a member of the UN sub-commission on minorities only to draw praise from John Humphrey, a co-author of the Universal Declaration of Human Rights. Thus, it could be plausibly argued that Masani was a principled liberal in his social and economic outlook, not an anti-Communist conservative appropriating liberal tenet.

To illustrate the point further, one can draw on the comparative ‘conservatism’ of Masani and Rajaji in the Indian context. Rajaji was a self-professed conservative rooted in Hindu tradition. Hence, unlike in the case of Masani, Balasubramanian feels no need to situate Rajaji’s conservatism in the transnational public sphere. However, if the ideological position of Rajaji and Masani is to be situated in the Indian context, there appears a stark contrast between the traditionalist conservatism of Rajaji and the liberal modernism of Masani. On Masani’s modern attitude in a largely traditional Indian society, political scientist Morris-Jones remarked and Howard Erdman concurred, “No figure in Indian public life could be more unambiguously modernist than its secretary Minoo Masani”.

In the case of Rajaji, Balasubramanian’s recognition of the attributes of economic conservatism (honest administration, fiscal prudence, and decontrol) makes sense. The same goes for his argument that Rajaji reworked liberal justifications for what was his older conservative intellectual genealogy under the influence of Shenoy. However, it could further be added that in his Swatantra days, Rajaji supplemented a conservative defence of social order with classic liberal individualism as he came to decry Nehruvian statism.

While Rajaji and Masani were politicians, Shenoy was an economist, academic, and a technocrat. Accordingly, much of his public pronouncements were concerned with economic matters. However, Balasubramanian’s paper posits Shenoy’s ideological commitments in terms of both free-market economics and Hindu revivalism. The arguments demonstrating Shenoy’s Hindu revivalist tendency are tenuous though, and could be seen as the weakest spot in an otherwise brilliant paper. For instance, Shenoy’s invocation of dharma to make the case for a limited State is in accordance with the long-prevalent tendency of Indian liberals to historicise their case. As C.A. Bayly showed, Indian liberals like Ram Mohan Roy, Ram Raz, Ishwar Chandra Vidyasagar, all resorted to historicism to make case for a liberalism rooted in the Indian tradition.

Moreover, the argument about Shenoy’s exposure to religious revivalism in his Banaras Hindu University (BHU) days is not adequately backed by corresponding evidence. Shenoy’s cultural critique of totalitarian progress, which he saw as “a case of voidness of the swimming pool”, need not relate to conservative rhetoric about dharma and a stable order as argued in the paper. His remarks on the absence of cultural well-being in a totalitarian society could be seen as a liberal critique of the absence of civil society and cultural freedom in a totalitarian society.

Further, Balasubramanian’s paper argues that Shenoy’s public engagement method mirrored that of the Hindu revivalist leader and the BHU founder Madan Mohan Malviya. However, as in the case of historicism, an Indian liberal precedent could also be found for Shenoy’s method of engagement with public discourse. Both Gopal Krishna Gokhale and Gopal Ganesh Agarkar, for instance, were involved with academic initiatives and used their pedagogy as well as the public platform to advance liberal ideas.

The only plausible case for Shenoy’s Hindu revivalist tendency could be seen in his defence of the caste system as a “flexible set-up [that] had the advantages of comparative cost and maximum production…” But even here, Shenoy was talking about an idealised varna system in which occupational mobility for individuals was ubiquitous. In this version, the caste system was functionally akin to the division of labour, not division of labourers as pointed by B.R. Ambedkar. Hence, Shenoy’s historicism borrowed from an idealised Hindu tradition, only in so far as it served his advocacy of free markets. Hindu revivalism did not inform his outlook in any meaningful way.

Indian market liberals and their borrowings

The above reading of the ideas of these three Indian public figures opens the scope for different labelling in contrast to Balasubramanian’s formulation. For their advocacy of anti-Communism, anti-statism, individualism, fiscal prudence, pro-market policy (not pro-business); defence of private property; and belief in the link between economic and political freedom, both Masani and Shenoy came closer to neoliberals/libertarians like Friedman and Hayek instead of the conservatives and revivalists. Though Rajaji certainly was a prominent Indian conservative who later veered towards classic liberal ideas in his opposition to statism based on an indirect exposure to the MPS ideas.

However, as Aditya Balasubramanian convincingly argues, Indian market liberals did not only borrow from their neoliberal counterparts in the West but also contended with the peculiar local context in their advocacy of liberalism. The Western neoliberal approach of encasing market forces from politics through the law was not seen in the Indian case, with the exception of private property rights. In fact, in the Indian context, the market liberals sought to advance their ideas in both electoral politics and public discourse. Shenoy was very clear about it when he stressed the need to sell the neoliberal doctrine first to people before the government in his 1959 MPS speech at Oxford.

This article originally appeared in ThePrint, and has been republished here with permission.

Read more: Should we alter our constitution?