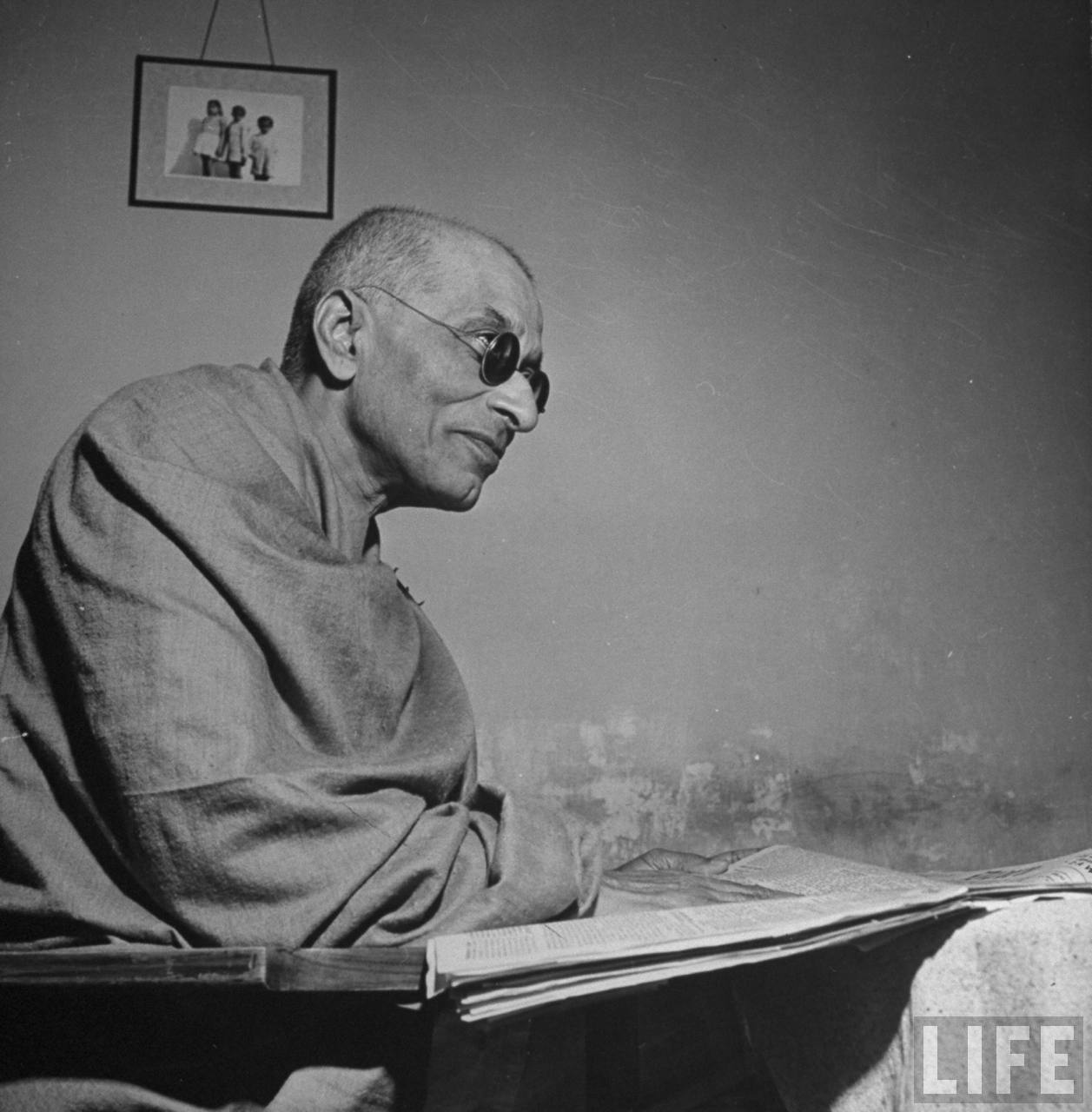 Today Rajaji has become an icon for those who believe in a free market. The “ believers” have retrospectively invested in Rajaji viewpoints which he did not espouse when he was alive. Increasingly Rajaji has been identified with the Swatantra experiment only. There is an increasing attempt in some sections to make out Rajaji as a libertarian in the Friedrich Hayek mould. In fact in any libertarian conference there is an open nostalgia for the Swatantra Party and a lot of questions about how viable would have been the libertarian movement if Rajaji was alive.

The question today which those who have read Rajaji and those who admired him for his principled opposition to some of the collectivist and leftist schemes of the then prevailing government, have to face is, where you would the Swatantra Party and Rajaji have stood today in Indian politics ?

The fact is that if we look at the answers which suggest to us it would be apparent that the answers are staring at our face if we are interested in looking at the right places. We choose not to because of the tendency of our libertarian elites to believe that social and economic libertarianism go hand-in-hand. This flies in the face of the experience of real politics from the world.

It has been the experience in politics throughout the world that social libertarianism and economic libertarianism have always been championed by different and indeed opposed groups. While the left has usually championed social libertarianism along with economic command and control policies, the right has preferred social conservativism and economic free-market policies. Though apparently it would seem contradictory but politically it makes perfect sense. A democracy works on the principle of a numerically counted majority. There are many ways to construct the majority. However broadly the contours of the same have either to be based on economic parameters or on social parameters. What is called broadly left of centre politics concentrates on economic collectivity and social individualism . Right on the other hand has concentrated on economic individualism and social collectivity. Any calls to vote based on social collectivity in any society must in order to be credible include the symbols , traditions , culture and mores of the majority of that society. This automatically makes any right of centre politics socially conservative. There is no doubt that Rajaji was a centre-right politician. Concentrating on his economic philosophy without considering his social philosophy is an incomplete reading. Only reading “Why Swatantra?” while disregarding his numerous books on Hindu religion and Indian philosophy, including his “Hinduism : Doctrine and Way of Life” is symptomatic of the reason why the libertarian movement has failed to take off in the country as a viable political entity.

As all of us who are interested in centre-right politics are aware that the ideology of Swatantra Party was articulated differently by different groups within the party. However even if we are inclined towards the nonreligious group within the party it would be apparent that the rhetoric relied very strongly on cultural and religious symbols. It needs to be remembered that Nani Palkivala, who spoke so eloquently on free markets also wrote quite extensively on Dharma even though he himself was not a Hindu.

Anyone interested in politics would acknowledge that the rise of the Bharatiya Janata Party (BJP) in Indian politics in effect consoildated the entire right wing politics in India. The right politics in India from the time of Independence and thereafter had always been split into three broad groups, a traditionalist right exemplified by the Ram Rajya Parishad , a nationalist right exemplified by the Bharatiya Jan Sangh and an economic right exemplified by the Swatantra Party. Through a process starting from the early 1970s with the agitation against Smt. Indira Gandhi and ending with the completion of the tenure of first NDA government in 2004, the BJP ideologically managed to subsume the entire spectrum of right-wing politics in India. One can either surmise that it was done deliberately through small compromises or one can say that it was a historical process of consolidation of what was then a deliberately marginalised force, but today the fact stands that the ideology of the BJP spans the entire gamut of all strains of right ideology in India.

If the Ram Janmabhoomi movement ensured effectively the extinction of the traditionalist right as a political force in the country, the high-voltage reforms of NDA 1 effectively ensured that those who would in future align with economic liberalism would look to the BJP as their natural party. The BJP standing in the centre as a very organised nationalist party managed to absorb all the rainbow right shades on the twin grounds of modernism and nationalism.

However the consolidation of the forces of the right in Indian politics has also coincided with the broad fracturing of the centre-left coalition which had been existent in Indian politics from the 1920s and which had reached heydays in the 1970s. The experiments with centre-left politics of UPA 1 and UPA 2 was an attempt to create a new centre-left coalition, which tried to inject a new combination of identity politics of groups outside the traditionalist spectrum with economic redistributionism. This was in keeping with the globalised trend of creating such a coalition of disparate forces for a viable political end, in keeping with left of centre politics. However as we all know, that experiment failed in India and it seems increasingly that the said attempted consensus is fracturing all over the world.

There seems to be a legitimate fear that this disillusionment may be picked up by elements outside the political mainstream for promoting radical and even violent ideas. The question which therefore arises is how to deal with such a situation. The first option is for the centre-right and the centre-left to align together against the new rising radical forces. However it has been seen wherever that strange coalition has been attempted to be created, it allows the radical outsider to paint both the centre-right and the centre-left as insiders and thereby gather an even larger coalition of disaffected against what is perceived to be the “establishment and the elites” . The other solution is for centre-right parties to acknowledge that there is an increasing clamour for traditional social values as a riposte to the perceived imposition of globalised social values. This is very problematic for the social liberatarians because it would seem that the global social discourse from the beginning of the 1990s has been based on the twin pillars of individual rights and minority group identities. The conflict of individual rights and traditional values are at the heart of the post globalisation reordering of politics which we see happening before us.

There is also need to ensure that the benefits of free-market reach the last person on the line. To that end policies have to be adopted and advocated which promote a peoples free-market approach in line with the cultural values of the society in which such market exists. No doubt that people do not want to revert back to socialism and the state controlling their lives but it is also a fact which needs to be acknowledged that it is increasingly the demand of the people that the benefits of free-market should reach every individual in society and not be limited to a very few. The increasing anti globalisation rhetoric and the targeting of the “elites” in every major democratic country shows not a disaffection with markets per se but a disillusionment with the methodology of distribution of it’s benefits. The challenge ahead is to formulate policies which would effectively address the problem of distribution of the benefits of the knowledge economy through market mechanism. It would mean enhancement of individual skill sets of large sections of the population of the country so that they could be generators of income rather than being recipients of government benefit .Such a formulation would be perfectly in line with the thinking of Rajaji. Remember many years before “Skill India” , Rajaji was talking about enhancement of vocational skills in his famous or the then infamous “Modified System of Elementary Education”.

In fact the medicine for the disease that our political economy faces today lies in the prescription of Rajaji . However it is important for us to read the complete prescription including the need to empower the last individual and to promote traditional values, along with the belief in free markets. Reading it in half measures, relying on dosages convenient to us would be injurious to both the economy and the politics of the country.

Vikramjit Banerjee serves as Advocate at the Supreme Court of India, and is an avid reader of Indian liberal thought.