Today is Constitution Day– the Indian Constitution was adopted by the Constituent Assembly 66 years back on this day in 1949; which later came into force on January 26, 1950. We thought it befitting to post an article by C Rajagopalachari on the Constitution, written in 1971. 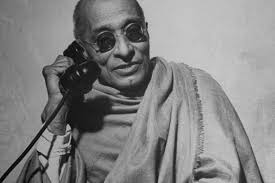 On the 26th Day of November 1949, “the people of India, having solemnly resolved to constitute India into a Sovereign Democratic Republic and to secure to all its citizens, social, economic and political justice, liberty of thought, expression, belief, faith and worship, equality of status and of opportunity, and to promote among them all fraternity, securing the dignity of the individual and the unity of the nation adopted, enacted and gave to themselves the Constitution of India.”

This great preamble to our Constitution is a shining monument of the wisdom, courage, foresight and sense of justice of the founders of our freedom. It should be read over and over again with concentration of mind and precision of understanding, when anyone is asked or intends himself to do anything to the Constitution. Every word in the preamble is important.

The Indira Congress has secured the support of Parliament for amendments which will destroy what I have called the keystone of the constitutional arch. The Congress (0), which refuses to accept Smt. Indira Gandhi’s leadership, has, however, resolved to join in the game of destruction initiated by Smt. Indira Gandhi. It is a strange development that out of all the political parties in India, the Swatantra Party has to bear the burden of defending the Constitution of India, all alone.

Mr. Palkhivala gave a magnificent address in Madras on 16th October to a record audience assembled in Bertram Hall of Loyola College under the auspices of the Servants of India Society. The audience overflowed into the verandahs and grounds of the college. Mr. Palkhivala fully dealt with what he called the outrage on the Constitution planned under the 24th and 25th amendments. Mr. Santhanam has dealt with the subject in an exhaustive manner in his article in Swarajya of August 7. The founders of the Constitution intended the fundamental rights inscribed in Part III to be the heart of the Constitution. The physician or surgeon may do some repairs to the heart. But he may not remove the heart and hope to keep the man alive. Part IV of the Constitution lays down objectives which the Constitution of India wants the Central and the State Governments to endeavour to achieve. Any violation of Part 111 is justiciable. But non-endeavour in the directions laid down in Part IV of the Constitution is not justiciable. Neither can the citizen seek to obtain an order from the judiciary to compel the Government to take action as directed in Part IV, nor does Part IV authorize the abrogation by the State of the rights inscribed in Part III.

The Swatantra Party does not, like other parties including the Congress (0) and the Indira Congress, promise to give to the people castles which they see in the clouds. The Swatantra Party sticks to the principles stated in the preamble of the Constitution which I have quoted and in particular to the principle of maintaining the dignity of the individual along with unity of the nation. The Swatantra Party maintains unalterable loyalty to the assurance given in the Constitution not only to freedom of speech and expression but to the right of the citizens, to acquire, hold and dispose of property, and to practise any profession or to carry any occupation, trade, or business, as clearly stated in Article 19(f) and (g).

With an electorate more than half of whom are illinformed and consequently very gullible, the Swatantra Party failed to secure in the recent elections any significant number of seats either in State legdatures or in Parliament. The Swatantra Party was thus in the position of the stone which was rejected by the builders in the Psalmist’s Hymn (Ps. 118-22). Today, however, this stone that was rejected has become the ‘headstone of the corner.’ The Psalmist sang and Jesus quoted the hymn in the temple of Jerusalem (Mark 12, 10 and 11): “Have you not heard this scripture, the stone which the builders rejected is become the head of the comer; this was the Lord’s doing and it is marvellous in our eyes?” Let us hope and pray that this stone which has become the head-stone of the corner will keep the temple of our Constitution from going to pieces.

If the property of any individual is wanted for public purposes, the Constitution as it stands gives the state the right to acquire such property after justifying such acquisition, but recognizing that the whole nation should bear the cost of such acquisition, lays down that just compensation should be paid by the State to the person who is deprived of the property. It would be totally unjust and contrary to the preamble of the Constitution and amount to sheer robbery to deprive an individual of what he has acquired or inherited without making the nation pay just compensation to him. A free way of life would be an impossibility if this fundamental right to acquire, hold and dispose of property, as clearly laid down in Article 19 (f) and (g), be nullified. Citizens would then be only serfs dependent on the mercy of those in authority.

To access the complete piece, click here. Visit indianliberals.in for more works by Indian Liberals dating back to the 19th Century.