On this day, 85 years ago, Sharad Joshi was born like an ordinary man, like all of us. Then why Sharad Joshi’s birth should be remembered and celebrated?

When Sharad Joshi came to India in the 70s, there was a huge boom of tragedy leaders in our country. Based on the points of mutual disputes and differences that have been rooted in the society for centuries, the leaders, who run their shops of prestige on them, used to pretend social service by sitting on the chests of farmers, Dalits and the underprivileged. All these leaders had one thing in common, their mood was feudal and they were going to invalidate and unroot the contribution of modern western countries in our lives.

Their imagery of social service was like continuing the life-long treatment of the ailing patient but never treating. Their methods of the social reforms were cosmetic in nature, which on the face seemed very compassionate and giving, but internally could not be treated anywhere. As a result, the multiple so-called attempts to reform the society and the economy created an army of such reforming leaders in this country who had almost no knowledge and were not even remotely related to economics and modern science. By representing and leading their respective castes and religious crowds, these leaders had become the biggest enemies of India’s modernity and liberation. It almost seemed like that it was a well-strategized, well thought of formula to never demand freedom, instead, table a long list of demands before the government.

Sharad Joshi was one of the first leaders to acknowledge the importance of freedom and dignity, and, that, there is no greater value than leading a free and dignified life. He firmly believed that governments were a necessary evil and thus he simply sought independence from the government and nothing else. He advocated that governments should not be made a matter of virtuous faith by repeatedly placing long demand letters in front of them. This puts the government on a pedestrial and allows it to use its brutal power to infringe the dignity and freedom of a common man. Sharad Joshi had also initiated freedom of the producers by demanding relaxation and in fact complete elimination of the existing laws instead of seeking stringent laws. Laws which do not promote stronger punishments for the enemy, but promote values of freedom for them.

After meeting Sharad Joshi, my entire view and way of respecting politicians had changed. Because of him, I started understanding leaders, not from their words or speeches, but the impact their thoughts on society. Today, I do not respect the leaders that build their imagery and prestige on the suffering of the others. I see them as the problem itself and not the problem-solvers or solution. These people are selfish and egoistic, they want people to remain unhappy so that they can be immortal in their remembrance.

Had I not met Sharad Joshi, I would have been idolizing the Robinhood type heroes in Indian films, the leftist writers and environment activists But meeting Sharad Joshi on 25 December 1994 created a parameter within me on developing a binary of like and dislike about the leaders, which never there before.

The real tribute to Sharad Joshi would not be to table a long list of demands to the government. It would rather be to make people’s lives more productive, dignified and artistic by posing in front of them, the ideas, thoughts and human innovations that have taken place in every corner of the world.

As much as he was interested in the art and culture of the past, he was equally fascinated by the knowledge of the West. While he could recite and explain a poem written in Sanskrit, he was equally interested in French. He was a cosmopolitan, pioneered global greats of the era, who was beyond the boundaries of religion, caste, language, and nation. And that’s why he used to pick a funny bone by minimizing these identities as “degeneration of birth” only. He hoped from the youth to not fall prey to any misunderstanding of their past and present. He hoped from the youth to travel to the skies at the risk of failing, to go beyond the horizon but always keep finding ways of liberating their nation and the whole of humanity. For him, a vendor selling food on the streets was a much more valuable element than an unemployed youth seeking employment by sitting on his degrees. If he would have, he would probably go to the food selling vendor’s shop and get a photo of him.

Sharad Joshi ridiculed and pointed out to the leaders who advanced the idea a casteless society, by sticking to their own caste identities. He wanted to inflict conceptualize and promote a world where nobody should ever require birth and caste certificates. At whatever age, whichever place one stand, one should get the right to the best expression. He aspired to reject every loop that binds human birth at any limit.

I consider myself lucky that I got a chance to meet and interact with him, I got the fortune to hear his golden words from his mouth. I offer my heartfelt tribute to the great soul on this memorial day today.

(This piece has been sourced, translated and reproduced here with permission from the Facebook wall of Mr Dinesh Sharma.)

SO Musings: Our Borders with China 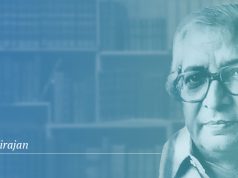 SO Musings: The Myth Of Free Education 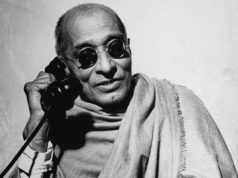 Rajaji on Communism and Indian Communists

India’s Language Conundrum: The Teacher is the Obstacle

SO Musings: Inflation vs. Morality