SPONTANEOUS ORDER EXPLORE THE POWER OF IDEAS
Home SO Musings SO Musings: The Secular State

It has been repeatedly affirmed that when the Indian Constitution laid down that India shall be a secular State, it was not intended that the State should discourage or be hostile towards religion, but that what was intended was impartiality towards all creeds and denominations. It was a refusal to accept the theory that different religions made different nations or that the State should belong to one religion more than another.

In a recent article in the American Review of Politics, an eminent writer has expounded (it great length how although the United States of America is a ‘secular’ State as far as any one denomination is concerned, it is at the same time a ‘religious commonwealth’. America, according, to this writer, believes in the necessity of a truly religious basis of citizenship. According to the American Constitution, Congress cannot make any law ‘establishing’ any religion or prohibiting the free exercise of any religion. But the American Constitution presupposes a religious society. ‘Secular’ in the American language means ‘non-sectarian’, and not a negation of or indifference to religion.

The European concept of the ‘secular’ State is very different. It is a concept hostile to religion starting out of a feeling that religion is a political nuisance and that religious belief is a threat to political unity and stable government. The American concept of the ‘secular’ State, on the other hand, is grounded on a firm belief in the incomparable value of the religious life. The separation of the State and Church in America arose out of the desire to protect religion and not out of hostility or dislike. The American people hold religion to be indispensable to the maintenance of republican institutions (Tocqueville). The framers of the American Constitution believed that the State can be free only it the people are basically a religious people. Although there has been some misunderstanding in some quarters about it, it may be stated that the Indian conception of a ‘secular’ State is nearer to the American concept than to the European. The Constitution did not intend to discourage or undervalue the place of religion in society. It placed all denominations and creeds on a religious basis without reference to the strength of their following. It marked out a different path from what was chosen by Pakistan.

It is true that national integration is rendered more difficult by differences in creed or denomination. But national stability would be fully endangered if all religious faith should gradually disappear. Whatever the forms and rituals of different creeds and denominations, religion and the restraints it imposes on human behaviour are of inestimable value to society, What the Indian Constitution-makers aimed at was not a general indifference to religion but a tolerant and broadminded appreciation of all creeds and denominations and a respect for one another’s religious beliefs and practices.

This article by C. Rajagopalachari (Rajaji) first appeared in the August 1957 issue of Swarajya Magazine. The original document can be accessed here. 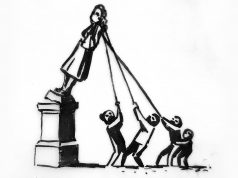 SO Musing: Removal of Statues