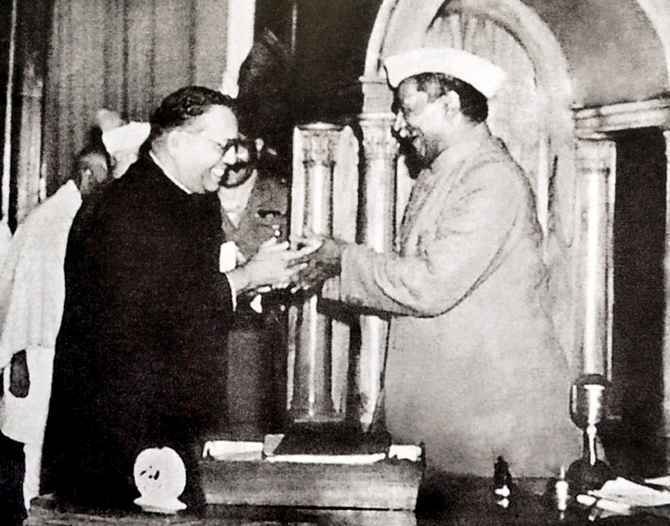 Of late, Dr Ambedkar has emerged out of oblivion to reclaim a prominent space in India’s public life, and rightly so. As a political leader, social reformer, and author, Ambedkar interacted with a range of other leading figures of his times, all belonging to different ideology and political camps.

Produced below is a short article by the liberal politician Minoo Masani reminiscing his interactions with the Doctor. Masani had the chance to read Ambedkar’s work on Indian finance in his college days and was also examined by him. Next, they worked together in the Constituent Assembly. On the issue of Uniform Civil Code, Masani and Ambedkar were on the same page though their efforts didn’t come to fruition. Masani’s admiration for Ambedkar’s intellect and service to the nation is clearly reflected in the piece. To us, Masani’s recollection piece is a reflection of the shared pedigree of Indian liberalism which went on to shape the nation.

When I appeared for the B.A. examination, my economics paper contained a question on this issue. I naturally wrote in favour of Dr. Ambedkar’s view on the subject. I did not know then that he would be the examiner. The result of this accident was that my paper was very well marked by him!

He and I were both members of the Advisory Committee on Fundamental Rights. There were several issues of a progressive nature when Dr. Ambedkar and I did not have our way. In the company of Mrs. Hansa Mehta, we therefore signed Minutes of Dissent to the official line. As far as I can recall two of the issues were a Common Civil Code and making free and compulsory primary education a fundamental right enforceable by law and not merely a Directive Principle as was the majority view.

Dr. K.M. Munshi refers to this in his book on the subject and describes us as the three idealists which I suppose we were. I am very proud that I was in the distinguished company of Mrs. Hansa Mehta and Dr. Ambedkar.

Published in the January-March, 1992 issue of the Freedom First magazine, the original text could be accessed here. (page 23)