Home Indian Liberal Archives #ThrowbackThursday: B R Shenoy — What Should be the Objective of Planning?... 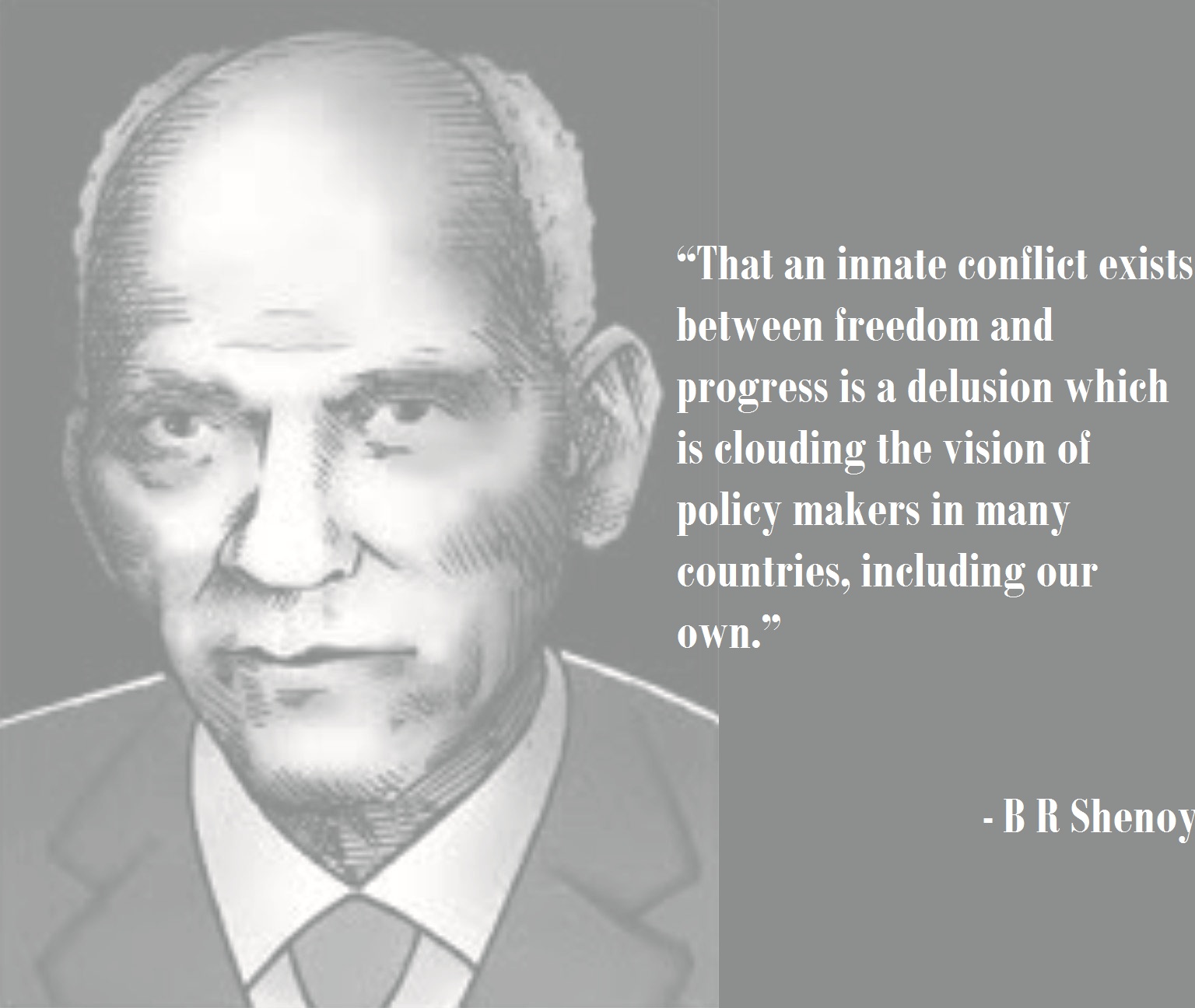 The following piece was published in a publication by Forum of Free Enterprise, which contains three essays by the author on Indian Planning. The author is B R Shenoy, who was one of India’s most prominent liberal economists and critic of state planning. What is posted below are excerpts from his original essay, which can be accessed here

The Prime Minister initiated the Third Plan debate in the Lok Sabha last month, spoke with pride of the “exciting pilgrimage” of the nation, along the path of statist planning, towards the twin objectives of economic progress and social justice. He cited statistics to show that the achievements of ten years of planning were already remarkable. Indian national income had gone up during the period by 42 per cent. This indicated that the first two Plans had taken the economy out of “its old stagnant ruts”. Though population had gone up by 77 million, per capita national income had risen from Rs. 284 to Rs. 330.

A generation ago, the average expectation of life of the Indian people was 24 years. It “rose to 42 years during the Second Plan period and now it was 47.5”. This “remarkable increase” represented many factors- better health, better food and better living conditions. Specific sectors of production had recorded great strides forward, output in agriculture going up by 41 per cent, in industries by 94 per cent and in power by 148 per cent. The number of students attending schools and colleges had risen by 29 million to 46 million and the number of engineering colleges from 134 to 380.

Though impressive at first sight, this is a rather misleading bunch of statistics. The per capita national income figures given by the Prime Minister vary from the statistics issued by the Central Statistical Organisation, New Delhi. According to the latter, per capita income rose during the past decade from Rs. 248 to Rs. 284. The minor case of a bad slip in the data of per capita income apart, the objection to unprocessed national income figures being cited in the prevailing Indian context as evidence of economic development is a fundamental one.

A distinction must be made between the expansion in the physical volume of the national product and the increase in the living standards of the people. The test of economic development is in the latter. The measure of it, therefore, is the consumer goods content, not the aggregate volume, of the national product. An expansion of the national product is meaningless if it does not provide “the masses of the Indian people” with “a good life”, the avowed objective of planning as stated in Chapter I of the Third Plan, reported to have been written by the Prime Minister.

For a correct measure of economic development of the opportunities for “good life” open to the masses of the people-the increase of 42 per cent in the Indian national product must be modified for the excessive output of capital goods and intermediate products, which can neither fill empty stomachs nor cover naked shoulders, and of luxury and semi-luxury goods, which do not enter into mass consumption. It must be modified, too, by two other deflators, the piling up of idle production capacities and the additions to inventories.

While both activities inflate the volume of the national product, they detract from the current well-being of the community. Idle production capacities are estimated at an order of 40-50 per cent in 40 industries and 35 per cent in the major and minor irrigation works. The additions to inventories are unascertainable for the economy as a whole. But it is a commonly observed phenomenon and is inevitable under inflation and controls.

It is sometimes argued that the creation of capital goods is part of the “accepted strategy” of economic growth, that in the gestation period of such growth a slower rate of increase in consumer goods is natural and that once the installed machinery goes into production, abundant consumer goods will become available. This is a treacherous fallacy. The problems before under-developed economies are poverty and unemployment.

To overcome them, the available resources of production must be utilised, firstly, to obtain the highest output and, secondly, to provide employment to the largest members at current wage rates.

A study of investment and production in 31 countries has shown that economic development does not result from a piling up of investments in the public sector; that when statist intervention in economic activity impedes the full use of human capital, economic development gets impeded, too, and that high rates of economic growth generally go hand-in-hand with policies of economic liberalism. Freedom is the life-breath of progress.

The policy objective of the state should be to stimulate industry and enterprise by demolishing economic barriers and restrictions. The state makes the maximum contribution to economic development when it devotes its resources and energies to its more natural functions and activities – the maintenance or provision of the rule of law, of defence from external aggression, of monetary and fiscal stability, of public health and education, of basic communications and of agricultural extension services. To quote from Colin Clark’s Growthmanship, beyond this the state “should avoid attempting to force accelerated growth, since to do so is to risk impeding it and destroying individual liberties in the process.”

To access the original, unabridged piece, click here. Visit indianliberals.in for more works by Indian Liberals dating back to the 19th Century.