Home Governance The Right to be Left Alone 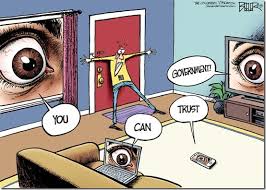 As Prime Minister Narendra Modi was delivering a speech in his recent visit to UAE, he remarked to a packed audience–“Now we have a government in India which is visible everywhere and every minute.”

He might have been on to something. The developments in recent times certainly suggest so. In the first instance, the government banned pornographic websites (as on now, the ban stands revoked) In the second, more troubling incident, cops in Bombay charged couples in a hotel room for public indecency. So apparently, what people do in their private lives, in a private place they have paid for, amounts to public indecency. Very well then.

As the state goes about imposing its morality by shaming and throwing out couples from hotel rooms, there is a debate going on in the Supreme Court on whether Indians have a right to privacy.  The instances in recent times seem to suggest, quite compellingly, that we don’t. It might serve us well to give up any pretence of priding ourselves on being a democracy, or in believing that there is any sense or semblance of freedom left in this country, while really any freedom can be denied at the whim and fancies of the government.

The state seems to contend that since our constitution does not explicitly grant a right to privacy, and that no significant judgement by the court sets a precedent that grants such a right, it does not exist. If this is to be believed, can the citizen have no reasonable expectations of being secure in his affairs and be free from interference?

It is one thing to derive a particular right from past precedents, from the wordings of the constitution, from legal history and any other such considerations. But it is an inquiry of a different kind, and an inquiry worth pursuing, to consider what rights people do have independent of such facts and considerations—an inquiry that starts from first principles. In other words, it might be entirely possible that a dispassionate look at the facts leads one to believe that we do not, indeed have a legal right to privacy. But in no way does that undermine the moral case for privacy.

As we’re debating privacy in India, I am reminded of a particular amendment to the US constitution (the Ninth Amendment).  Curiously, the debate on privacy is in full swing in the US as well in the wake of the NSA collecting information and spying on their citizens. This very provision in the US constitution has been invoked by some to make the case for right to privacy. The Ninth Amendment states—

“The enumeration in the Constitution, of certain rights, shall not be construed to deny or disparage others retained by the people.”

This is an important distinction and principle. In suggests, for one, that rights are flexible. Or, to put it more precisely—while certain rights may be fundamental (the right to life, liberty and property); they can have a variety of expressions; and it might not be possible to encode each of these in the constitution.  As times change, so do circumstances that warrant a revision in the manner rights are protected and find expression in society. And it is for our courts, our legislatures and our society to keep up with this.  Invoking the Ninth Amendment, a senator from the US observed, giving a speech to the US people that, “Your Rights are many and infinite.” They indeed are.

Indeed, it is not uncommon for our judiciary to recognise certain rights as being implicitly guaranteed in others. The Right to Information was recognised as being contained under, and a natural corollary of the Freedom of Expression by our highest court; as was the Right to Education seen as an extension of the Right to Life.. Whether or not these are reasonable interpretations of the right to life and expression, and whether these rights have been properly implemented or not is a separate question. Our courts will see, I hope, that the right to life naturally contains the right to privacy.

Legal questions aside, what does privacy mean; and why ought such a right be recognised and protected?

There is little distinction in my mind between the right to property and the right to privacy. Each naturally implies and contains the other.  The right to property recognises that there is a sphere for each person; that this sphere is private, and within this sphere, she is sovereign and autonomous. Property rights recognise that there are certain matters on which only the individual might exercise his discretion, simply because these considerations fall within her private sphere. These matters include, but are not limited to, what a person may or may not say, who one may associate with and the manner in which one dispossess off or employs one’s property and possessions. If the individual is to be subject to the judgements and considerations of others—of other persons or the state, then such rights are rendered meaningless, or at least undermined to the extent to which they are violated.

The right to privacy is exactly that—it means that in carrying out one’s affairs, one ought to be free from interference from the state and other people. Such an understanding is the very basis of rule of law and individual rights and liberty. Ayn Rand expressed it best when she said, “Civilization is the progress toward a society of privacy. Civilization is the process of setting man free from men.”