Home Governance Private Property Rights – You have it, but you don’t 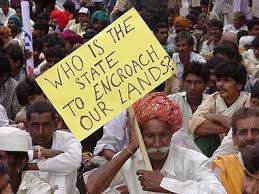 The following post talks about the Right to Property in Nepal, and its status in the new constitution that came into force this month.

The freedom of an individual to keep ownership of the fruits of his/her labor is the fundamental principle of private property rights. This right manifests in the form of lending the owner of a property, the freedom to use, dispose of, and transfer the ownership of that particular property to any other individual/group through voluntary transaction. It is one of the fundamental pillars of economic freedom – the harbinger of prosperity. The UN has also ratified it as a Human Right. Countries today guarantee this right to their people as their fundamental right through their constitution – the supreme law. So does Nepal. Or does it?

Mere addressing property right as a fundamental right does not necessarily guarantee it. Particularly so when the article instating the property right is quickly followed by the lawmakers’ favorite little word – explanation. This is usually where the lawmakers tweak the preceding texts in such a way that they promise something, but they don’t really have to keep the promise. The Constitution of the Federal Democratic Republic of Nepal lends us an example:

“Every citizen shall, subject to laws in force, have the right to acquire, own, sell, profit from, or engage in other transactions relating to, property.”

And then (you guessed it right): Explanation!

“(3) … when the state acquires private land for purposes relating to public interest, the basis and process of compensation will be as per the law.

“(4) Nothing … shall be deemed to prevent the State in enforcing land reform, management and regulation for the purpose of increasing production and productivity of land, modernization and commercialization of agriculture, environment preservation, organized housing and planned urbanization.

(Note: The above text is an unofficial translation by the author.)

Since the constitution stipulates that the compensation be determined by law, the compensation against the expropriation of private property per se is no more guaranteed by the constitution. It would depend on the Acts relating to the purpose that it is actually being expropriated for. And it is again possible (although not necessarily so) to amend the Acts to rid the state of the burden of compensation altogether. One recent example would be the government denying land-owners a compensation for the acquisition of their land by the state during the road expansion drive in Kathmandu. The constitution does not make it mandatory that expropriation only be allowed after complying with a due process, including a just, fair and reasonable compensation. Instead, it states that nothing shall prevent the state from expropriating private property for ‘public interest’ purpose.

Here are a few examples of how other countries protect private property, and make compulsory provisions for compensation if there ever need be to expropriate somebody’s private property:

Article 31, The Constitution of India

The Constitution of the United States, Amendment 5 – Trial and Punishment, Compensation for Takings. Ratified 12/15/1791:

“ … nor shall private property be taken for public use, without just compensation”

Compare these constitutional provisions with those of Nepal and it becomes clear that you and I, the citizens of Nepal have our property right, and yet not.

This post has been taken from Econitynepal.com. Akash Shrestha is a Senior Research Officer at ‘Samriddhi, The Prosperity Foundation.’