The ninth Annual Survey of Education Report (ASER) was published last week. ASER is an annual household survey to assess children’s schooling (both public and private) status and basic learning levels in reading and arithmetic, among other things. With the number of children surveyed at 569,664 from 15,941 villages of 550 districts, the sample size of ASER is larger than that of the NSS survey rounds.

Some of the important findings of ASER 2013 are:

These are encouraging numbers. All these are inputs to achieve one thing and one thing only – providing quality education to children. But this is where the good news ends. The signs of success/failure of whether these efforts have been translating in providing quality education or not can also be found in ASER – in their surveys on learning outcomes.

The most worrying aspect of ASER 2013 continues to be the falling learning outcomes. As the report notes, “For a variety of reasons, close to 78% of children in Std. III and about 50% of children in Std. V cannot read Std. II text as yet. Without immediate and urgent help, these children cannot make progress in the education system. Grade level teaching of the syllabus cannot be done effectively unless the basic skill of reading with understanding is in place. Without this fundamental skill, the child cannot progress in other subjects either.”

The figures below shows the level of reading competency over the last five years for government and private schools separately.

Figure 1: % Children in Std. III who can read at least Std. I level text 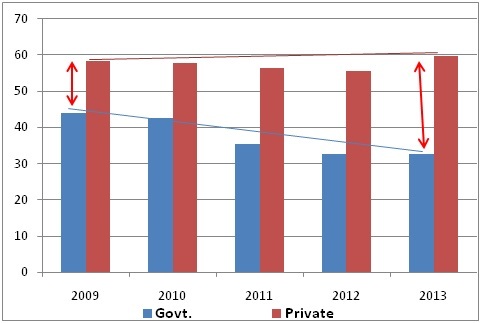 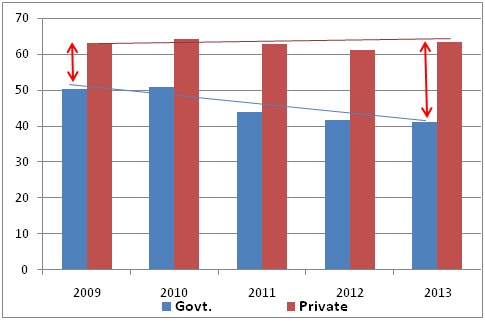 As is evident from the figures above, the learning levels have consistently been falling in government schools while it is holding steady in private schools. The condition is equally grim when it comes to competency in basic arithmetic, as seen in the figures below.

Figure 3: % Children in Std. III who can at least do subtraction 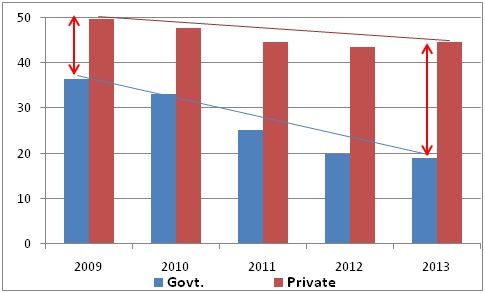 Figure 4: % of Children in Std. V who can do division 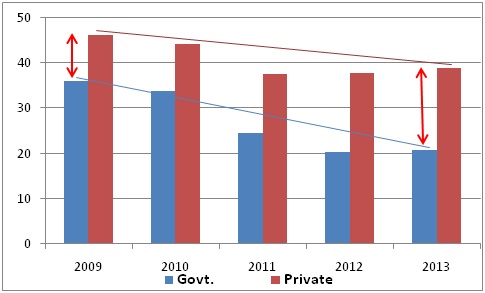 Learning outcomes have been accorded due importance in various policy documents and government initiatives of recent times like the 12th Five Year Plan document’s chapter on education, Sarva Shiksha Abhiyan (SSA) guidelines for 2014-15, Economic Survey 2012-13 chapter on Human Development, etc., but there is no PLAN that takes on the issue of learning outcomes head-on and on a war-footing. 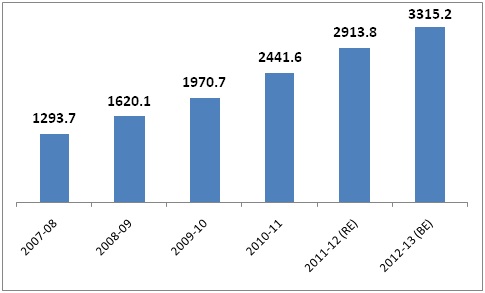 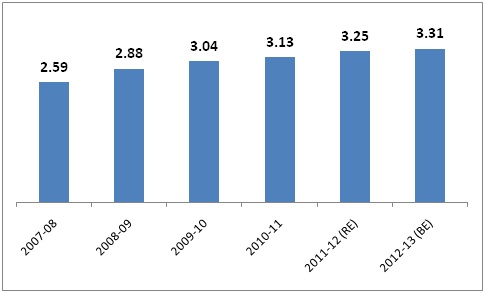 Also, PAISA Report of 2012 finds that per student allocation have also increased from Rs 9367 in 2010-11 to Rs 11509 in 2012-13.
Thus we see that there has been no lack of commitment to excellence in education on the part of governments as far as resource allocation is concerned. However, steady fall in learning outcomes as seen in figures above begs the question – What are we doing wrong?

Yamini Aiyar over at the Accountability Initiative notes some important learning from their flagship PAISA survey over the years. They found that planning, budgeting and decision making are not related to learning outcomes. They also found that the entire elementary education planning and budgeting system is extremely centralized resulting in a mismatch between school level needs (even of the most basic things like inputs) and actual expenditure. Outputs and outcomes are far removed from any influence of parents or schools.

The dichotomy that exists between the centralised system of service delivery and the increasing focus on learning outcomes makes it almost impossible to get the desired results. Some pertinent questions raised by ASER and PAISA reports points in the direction that simply increasing outlays every year is not the answer. They have been highlighting that an outcomes based system requires autonomy and innovation at the school level.

What better way to have the autonomy with parents and students than by granting them the independence of going to a school of their choice? And what better way to encourage innovation and competition than to let many schools (private) bloom by removing the roadblocks in their setting up and functioning?

A major rethink of our outmoded ways of imparting education is necessary. Why not let parents and students decide who can best meet their needs?

For a quick summary of the ASER 2013, read this or see this.