Home Governance What Should Be The Price of A Train Ticket?

From my experience of Indian railways I suggest that they find someone who has bought a ticket, and give him a prize. – James Cameron in The Guardian, 21 June 1983 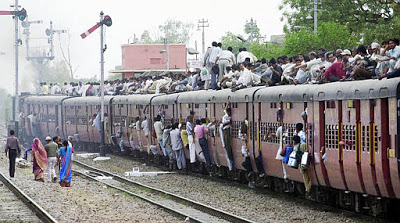 It was announced last week that Indian Railways (IR) is going to increase passenger fare by 14.2 percent and freight charges by 6.5 percent. People have responded to the news in mixed ways. While some have celebrated the move as they believe a fare hike was long overdue and necessary for improving railways finances and facilities, others have lamented the rate hike saying it was totally unwarranted given that there has been no corresponding improvement in rail safety, train speed and passenger amenities and comfort over the years.

This begs the question, what should be the price of a train ticket? Should it be based on the cost incurred? Should it be determined arbitrarily, as it is done today? Or should the price be indexed to one of the price indices to do away with the need for occasional rate hikes and the following protestations?

Whether IR should have hiked the fares or not, can only be answered if we understand how prices are determined in the marketplace. Prices, as they are determined in markets, comes about through a discovery procedure, where they act to coordinate separate acts of different people among whom the knowledge of relevant facts are dispersed. There can be no price outside of the market. And since IR is a government monopoly, we cannot know the market price of a train ticket. Whatever sum a train traveller is asked to pay for a ticket, is a fee and not the price.

It is evident that price of a rail ticket is not motivated by the fact that IR needs to maximise profits. Their CEO (Minister of Railways) – a politician and not a businessman – is motivated first by getting re-elected, and whatever else motivates him comes a distant second. It could very well be that if IR were facing competition from other providers of rail transport, the prices may have been dropping despite the rise in some of the input costs. IR, when operating as a government monopoly, simply don’t have the incentives to minimise costs and maximise profits by satisfactorily serving the maximum number of customers possible.

Almost all of railways decisions are based on populist measures. Take for example, the case of building coach factories at Rae Bareily in Uttar Pradesh and Madhepura in Bihar. It is clear that the plan was initially mooted by the then Railways Minister Lalu Yadav during UPA I, to appease his parliamentary constituency of Madhepura and that of UPA Chairperson Sonia Gandhi’s constituency of Rae Bareily. Clearly, it was not a business decision based on building the coaches at the cheapest possible cost.

If there ever was any doubt that rail fares are not determined only by political exigency, Shiv Sena and BJP parliamentarians from Mumbai got the Minister of Railways to roll back the hike in fares of Mumbai local trains.

Tirthankar Roy in his book, The Economic History of India (1857-1947), notes that the principle of railway construction went through four stages: 1849-69 saw only private enterprise, 1870-80 saw the accent shifting towards state enterprise, from 1881-1924 recourse was again handed to private enterprise in management with state ownership, and from 1924 onward the state assumed ownership as well as control. We see no reason why the rail transport can’t once again be privately run. We have already seen the enormous benefits of opening up in telecommunications and air travel.

Imagine a situation where a Tata, a Reliance and a Mahindra train, are all bidding for you to buy a seat in their train with the promise of a more comfortable, safer and quicker journey, at competitive rates, without going through the pain of an IRCTC booking window. Sigh!