“The law is the organisation of the natural right of lawful defense. It is the substitution of a common force for individual forces. And this common force is to do only what the individual forces have a natural and lawful right to do: to protect persons, liberties and properties; to maintain the right of each, and to cause justice to reign over us all.”

The Law that limits itself (role of government) to securing person, property and liberty of each individual, that does not see individuals through the lenses of caste/religion an individual belongs to, that does not intervene into the affairs of businesses; is what we should strive for. Maintaining law and order is also what some economists have called first order public good, and effective provision of this should form the top priority of any government, as it is also a prerequisite for a just and prosperous society.

How has our government performed in its primary role of implementing rule of law from which it draws its legitimacy?

According to the latest Crime in India report published by the National Crime Records Bureau (NCRB), the performance of our criminal justice system paints a grim picture, as seen in Figure 1 below. 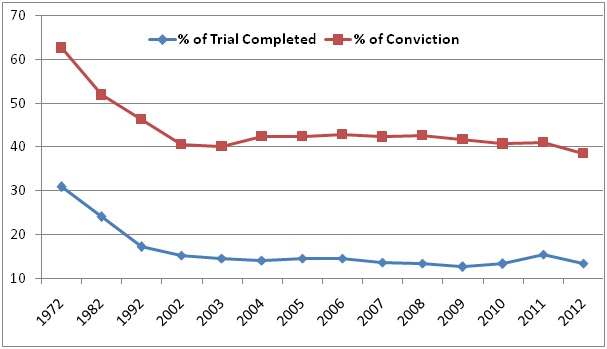 A similar picture is painted when we look at the absolute number of Indian Penal Code (IPC) cases brought for trial and cases in which trial was completed (Figure 2).

Figure 2: IPC Cases for trial and their disposal by courts – Ever increasing backlog 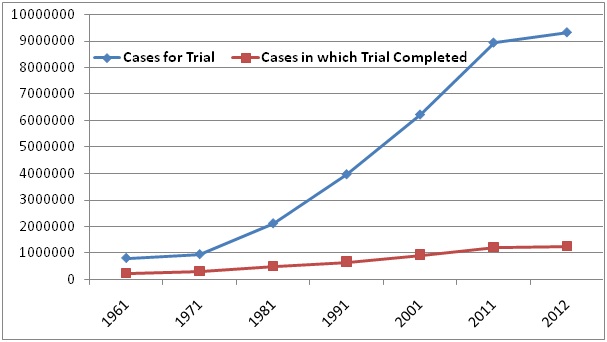 Thus, we see that our criminal justice system fares very poorly when it comes to delivering effective outcomes. Such high pendency rates and low conviction rates decrease the cost of crime for criminals, since he/she knows that the probability of getting caught and convicted is very low.

Under-staffed, starved for funds, poorly trained, poorly equipped, and possibly under-paid police and judiciary is only part of the problem. Even when these infrastructural issues gets taken care of by better funding, there are other structural issues that need immediate attention before any improvement in our criminal justice system can be considered sustainable.

When the fiscal deficit – set by none other than the Ministry of Finance itself – crosses its limit, sovereign credit rating companies get outraged and threaten to downgrade India, which in turn forces the government to course correction. When the price of onion rises suddenly, all of us get outraged and point fingers towards the government which in turn cracks down on hoarders and bans exports of specific items. More importantly, directly or indirectly, these issues form part of election campaigns and are promised to be taken care of.

However, deteriorating “rule of law” and criminal justice system hardly ever gets similar attention, even though it has been in perpetual decline. Except for lip-service provided when incidents breach all moral conceptions of “rule of law”, not much is seen by way of action in this regard. While roads, electricity, employment, price rise, etc., all figure very prominently in the list of things that our government focuses on – all of which can largely be provided by private corporations more efficiently and cheaply – one thing that state has a clear monopoly on, “rule of law”, gets neglected.

We simply do not demand enough accountability from our governments when it comes to the effective and quick delivery of criminal justice.