Home Governance US Government Shutdown: For Better or for Worse?

The United States federal government shut down on 1 October 2013 as Republican-led House of Representatives (commonly known as “the Congress”) failed to pass a budget or a continuing resolution for the fiscal year beginning October 1. At the heart of contention is the Congress’ desire to delay or defund the Patient Protection and Affordable Care Act (commonly known as “Obamacare”) and Democrat-led Senate and the President insistence on including Obamacare in the Appropriations Bill. The US constitution vests the budget making powers with the Congress while the President reserves the power to veto.

The Republican-controlled Congress is seeking spending cuts in exchange for an increase in debt ceiling. The White House on the other hand is unwilling to negotiate on a government funding bill or debt limit increase, thus requiring the furlough of non-emergency personnel and curtailment of agency activities and services.

In a letter written to the employees of the United States Government, President Barack Obama said,

Today, I wanted to take a moment to tell you what you mean to me – and to our country. That begins by saying thank you for the work you do every day – work that is vitally important to our national security and to American families’ economic security. You defend our country overseas and ensure that our troops receive the benefits they deserve when they come home. You guard our borders and protect our civil rights. You help small businesses expand and gain new footholds in overseas markets. You guide hundreds of thousands of people each day through the glory of America’s national parks and monuments, from Yosemite to the Statue of Liberty. And much more.

Notice how the things mentioned by Obama may look harmless on the face of it and a majority of people would have no qualms in agreeing that they are legitimate and necessary roles of the government.

The speechwriter for Obama was careful in mentioning the few presumably essential public services provided by the government while obfuscating all the others that make life difficult for the common man under the umbrella title of “and much more”. There are a number of other services provided by the government that create hindrances for the people in their daily business with each other. The part of government bureaucracy that requires issuing clearances, collecting taxes, regulating businesses, fighting wars at home and abroad, etc. do not find explicit mention.

The chart below shows how the federal government expenditure has been increasing over the years – from a figure of US$ 114 billion in 1960 to US$ 3923 billion in 2012. This is an increase of about 3600 percent over a period of 52 years (clocking an average annual increase of 7.27 percent over the same period). 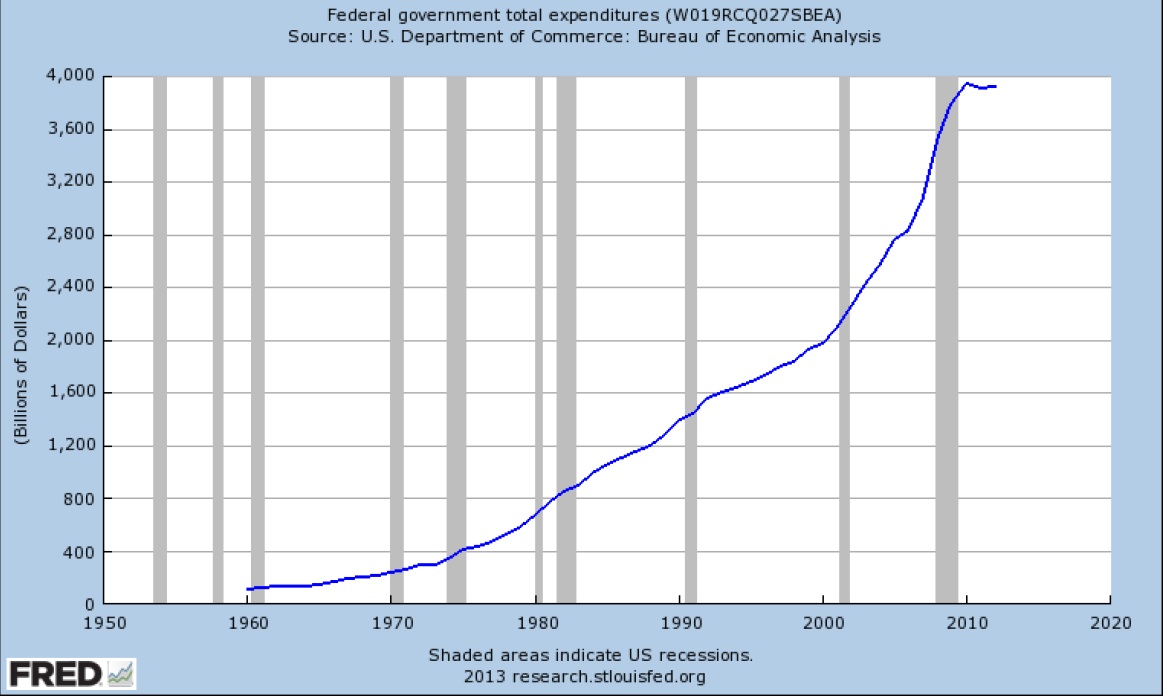 How much of this increase in the size of government was necessary? Members of Congress in the US much like our parliamentarians in India are also called law-makers. This could be a misleading term. There is a clear distinction between law and legislation as understood and explained by Friedrich Hayek which is often lost on many of us. A lot of what the government has come to do today is not what they need be doing in the first place, efficiently or not. Suppose tomorrow a bill is passed in the parliament making a separate department of the government responsible for bringing bread, milk and eggs to the doorstep of each household, and forcing every person in the country to have the exact same meal for breakfast. And in another bill passed it is suggested that it is acceptable for people to kill each other. That killing people has become legal does not make it right or lawful. It thus becomes important that we are always conscious of the difference between law and legislation. Not all legislation passed by the law-making body of the land is lawful.

There is a distinction between laws that are made by kings and elected- parliamentarians and laws that are found through an exploratory process. Hayek greatly admired the Common Law – the law that came out of British courts starting in the middle ages – as it was not a judge-made law but a judge-found law. The law is found based on the prevailing social expectations. The Common Law is law that evolves from individual behaviour in a spontaneous manner without being directed by an individual (King) or a group of individuals (Congressmen and Parliamentarians). More on this can be found in the first volume of Hayek’s Law, Legislation and Liberty.

A closer look at the laws governing any democratic country today would suggest that we can do away with a majority of what the government does to great benefit for all of us.

The separation of power laws that makes the US government shutdown a possibility in the event of non-passage of budget or a continuing resolution is helpful as it generates debate on cost-benefit of issues of dispute. In Fiscal Responsibility and Budget Management Act of 2003, we too have a law institutionalising fiscal discipline. However, time and again we have flirted with the limits imposed on the Central Government expenditure almost making the act redundant. It is high time we made the limits of FRBM Act binding and restrict the ever expanding government.

Other interesting reads on the subject:

Economist Manika Premsingh over at India Spend has some crude estimates of what it would cost Indian economy if the Government of India were to shut down. She estimates that a 30-day shutdown of the central government will lead to a 31 percent reduction in the estimated fiscal deficit for 2013-14.

Here is a brief take on the hypocrisy of the US Government shutdown by Reason magazine’s Nick Gillespie that we completely indentify with.

Max Borders and Jeffrey Tucker over at FEE have a fascinating piece detailing 50 ways people are working to overcome obstacles imposed by the government. A must read for all.