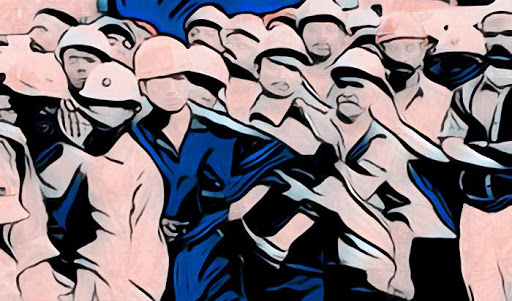 Amidst the Corona fiasco, three State governments of Madhya Pradesh, Gujarat and Uttar Pradesh have relaxed their labour regulations to facilitate economic activity and to increase growth. As expected, the move was met with heavy criticisms accusing the deregulation of being ‘inhumane’, ‘predatory’ and bringing back’ slavery’. Even though there is lots of literature on labour reforms and why they are important, through this post, we will look at the primary arguments in favour of reforms and why such accusations and intentions are ill-informed.

The current framework that governs employment regulations is the Industrial Disputes Act (IDA) of 1947. Although there have been more than a hundred amendments, the framework that exists was written during and for the British period. This archaic law was made furthermore restrictive to any kind of growth in the 1970s when India came very close to being a dictatorship. To paint a picture of the unnecessary red tape, there are 47 Union laws and 157 State laws which overlap making labour regulations convoluted. Labour, being in the Concurrent list has been pet by both Centre and States to satisfy the loudest proponents of ‘worker rights’ unions who represent, at most, less than ten per cent of the workforce in the country.

Since LPG (Liberalisation, Privatisation and Globalisation) reforms of the 1990s, India’s growth has increased manifold. GDP at current US$ in 1991 was ~270 billion; this has risen to ~2.8 trillion in 2018 and working towards 5 trillion in the near future. During the same period, the labour force participation rate reduced from 58.4 per cent in 1991 to 49.3 per cent in 2018.

This fall in employment is due to the change in the composition and nature of jobs. For instance, research attests that from 2005-10, informal jobs have increased substantially from 8.6 to 21.9 million, whereas formal regular jobs have reduced from 18.6 to 5.7 million.  So, is liberalisation the villain of the poor as some would want you to believe? Far from it.

Strict labour laws don’t let small companies grow into larger firms. These regulations have restricted economic growth for the employers and thereby more jobs for employees. They have made it difficult and cumbersome for employers to recruit and fire workers even with just cause. The result of which is seen clearly when compared with China and Bangladesh.

The largest garment manufacturing units in China houses 30,000 workers; the number for Bangladesh goes up to 10,000 workers while India is stuck with not more than 1000 workers in a single unit. Business is a dynamic entity whose requirements change seasonally, but the regulations have been static, thereby limiting the growth of large industries and foregoing formal employment opportunities for Indians.

Although formal employment opportunities have been made difficult, there is still work to be done. This encourages informal labour force – exploitative contracts, rented workers, bonded labourers and so on. In India, around 94 per cent of the workforce is informal without any social security and other benefits. In comparison, the unions who are opposed to any kind of labour reforms represent less than one-tenth of the total workforce.

Apart from agriculture, informal non-agricultural workers had been rising from 75.3 per cent in 2010 to 80.28 per cent in 2018. Researches have concluded that the immediate reasons for a growing informal economy are increased taxes, social security contribution burdens, the intensity of regulations and low quality of public services. Employers take the short-cut and hire from the informal sector for their dynamic needs, thereby pushing demand up in the informal sector.

The World Development Report, 2013 by the World Bank surveyed businesses from 102 countries. They found out that larger firms tend to be more productive, innovate more and compete in the export market often. They also pay better wages and provide a decent security net for the workers. It is evident that employers pay more only when they can afford to, and they will be able to afford only when they grow. But the nature of India’s labour regulations disincentivises businesses from expanding and moving to the formal sector. Researches also confirm that the value-added per worker in the informal manufacturing sector is one-tenth of that of the formal sector; even then employers’ favour informal workers due to the fear of labour laws along with the rent-seeking and inspector raj associated with them.

The hangover of good intentions

“The road to hell is paved with good intentions.”

Everyone wants what is good for the people, but some fixate on the good intentions alone and turn blind to the outcome of such intentions. Those advocating for the existing labour laws seem to be hungover from 20th-century socialism of good intentions. They fail to see the abysmal state of the manufacturing sector in India even with a massive population of unskilled and semi-skilled labour waiting to be useful.

In 2004, researchers Besley and Burgess studied amendments to the IDA from 1958 to 1992. They classified the amendments as pro-worker, pro-business or neutral based on their respective nature. They found out that states which made more pro-worker amendments saw low employment, output, productivity and investment in formal manufacturing while informal sector boomed. Although the study was criticised on the basis that it only factored IDA leaving other regulations out; but further studies also point out similar results. States, including Gujarat and Andhra Pradesh, seems to have made pro-business amendments and established flexible labour markets which have helped them achieve positive results in employment and growth.

Strict labour laws were fashionable in the 20th century when mercantilist societies exploited their colonies for cheap labour, but such violation of fundamental rights do not exist in the modern world. It is in the informal sector that workers are poorly treated without any social security and insurance to fall back on.

Formal businesses employ short-term informal contract labourers in an exploitative manner instead of going through the troublesome and over-demanding statutes of employing formal labourers. We should also note the financial inability of small businesses to comply with social security requirements and labour regulations as mandated by the statutes. This leads to increased unemployment or over-mechanisation or both because employers would invest in capital instead of labour. Therefore, the advocates of stricter labour laws are indirectly batting for pushing more workers into the informal sector, which resembles 20th-century exploitative practices. In a nutshell, they are indirectly oppressing employers, thereby workers with the tyranny of good intentions.

The government should make it easier to comply with the regulations, thereby encouraging formal employment and growth instead of restricting opportunities. The recent move towards single window registration, insolvency and bankruptcy code, among others are positive steps, even with all their issues.

Why waste a crisis?

Historically India has been able to make structural reforms only during crises, in that way crises are good. However, public-policy wonks opine that no one can stop an idea whose time has come. At the same time, no one can force an idea whose time hasn’t come. They also opine that reforms cannot be done without an intellectual consensus prevailing before the crisis. For example, even before the 1991 liberalisation, an intellectual force was batting for reforms which helped when the time came.

Similar consensus on the incapacity of the labour regulations is present in the intellectual space among policy-makers. Many feel the need for a simple course correction to capitalise on the enormous demographic dividend and the resources India has. Maybe, the time has come for structural labour reforms in India to commence the formalisation of the majority of workers. This will energise the ‘Make in India’ initiative and integrate India with the global supply chain. Given the current global apprehensions about China; India stands to gain considerably, but we can’t expect to compete with Vietnam or even Bangladesh without reforming labour laws. Petty old moral arguments like accusing reforms as ‘slavery’ should and must be avoided because it again pushes back the intellectual conversation at least by a decade, worse it sympathises with the 20th-century socialism – a failed ideology by all accounts.