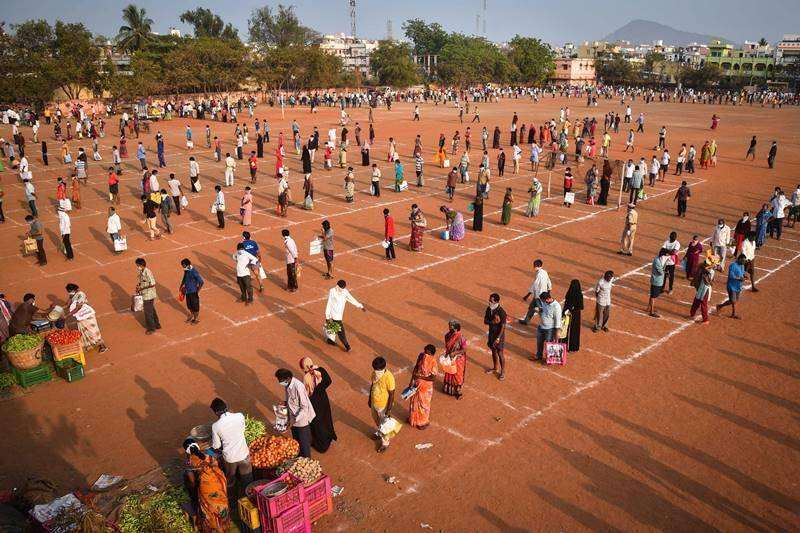 Social distancing is one of the most important preventive measures for COVID-19 but it has been difficult for the government to assure that everyone follows it. One way out was that the government just releases some guidelines, stating the measures that need to be followed but instead, for better results, many states in India started implementing a unique way for social distancing. The district administration asked traders and shopkeepers to draw circles, at a 1-metre distance each, using white chalks in front of their shops for customers to stand there and buy the essentials such as groceries, fruits and vegetables, medicines, etc. An official from the Maharashtra Chief Minister’s Office said that the government has started pushing the concept across the state by sharing photos of such social distancing practices across the state. The idea is proving a healthy option for people who come out of their homes to purchase groceries, medicines and vegetables.

Now, let’s analyse the tool used in this example. These circles or boxes act as a Nudge, which keeps on reminding the people to maintain distance. Hence by using a nudge, the government is able to make its policy more effective. In the current scenario, we can devise a Nudge to make people wear masks such as using posters in public areas with messages like “Use a mask as not using one puts you as well as others at risk”. This puts social pressure on the people to wear masks and they also feel that not wearing one will affect not only them but others as well. Right now the government uses its power of punishment to do so which is an expensive method as well as forceful and ineffective.

Similarly, Nudge is being used by governments all across the world for better implementation of public policies in the area of health, education, sanitation, environment protection, etc. Behavioural Economics is one of the hottest ideas in public policy worldwide.The White House has announced its own behavioural insights team last summer. The UK government’s Behavioural Insights Team (BIT) uses this discipline to craft better policies and their implementation. To solve the issue of littering and to promote recycling of waste products, the UK government came up with tools like incentives and loss aversion to make effective policy. The United Kingdom consumed approximately 14 billion litres of soft drinks in 2007, equivalent to around 234 litres per person. Recycling rates of such products is markedly less in the UK compared to other countries in Western Europe. There are a couple of examples of incentive schemes that have been used in the United Kingdom to improve recycling rates. IrnBru, a consumer drink, was made available in refundable glass bottles. Empty bottles could be returned to retailers, who would provide either cash refunds or a credit voucher. The deposit value was 30p, and an impressive 70% of bottles were returned for cleaning and reuse. Another deposit scheme was introduced which used loss aversion as a tool, wherein the consumers paid an additional fee to the retailer when purchasing a bottle or associated packaging. The deposit was refunded when the consumer returned the empty packaging. In a recent survey, 82% of people in the United Kingdom supported the scheme. So this case study clearly depicts how nudge can be successfully used to bring about a desirable change in the behaviour of the people without using forceful means.

But why does the need to use Nudge in public policy arise?

Public policy is used to bring about a desirable change in the behaviour of people. One fundamental issue that we find when we look back at the inception of policy making, is that the government assumed that people are completely rational beings who know exactly what is best for them and society. In the real world, however, that’s not the case. The logic was straight: the government would make a law which if people didn’t follow, would result in punishment. Naturally, if people were rational, this would work in regulating behaviour. However, unseen consequences are omnipresent.

Such policies do work in some cases but fail in most. A government intervention that is intended to have a certain outcome often ends up yielding a different result. For example: according to the APMC Act, farmers can only sell their produce in government-regulated APMC mandis. The intention was to protect farmers from exploitation by private companies. But this act turned out to be one of the biggest barriers in farmers’ freedom to earn a dignified livelihood. This act was recently amended owing to the Covid-19 pandemic.

It requires extreme clarity of thought to devise policy initiatives that hit the target, and too often the actual outcomes stray far from what was desired.

With the evolution of public policy making, we bring in a new approach of behavioural economics; the love child of economics and psychology – nudging. Bringing more realistic knowledge into the design of public policies can make them more effective. But more than anything, it promotes liberty and choice.

A nudge is a means of encouraging or guiding behaviour without mandating it. To steer people’s choices in directions that will improve their lives, governments can “nudge” citizens by presenting issues in a certain way, without forbidding any options. Behavioural interventions can be powerful. Low-cost tools can help governments improve their public policies by taking into account how people make choices. Some policy commentators conceptualise nudging as an alternative to the law and regulation as they are design-based choice approaches to regulation which provide the state with tools which are not the traditional policy instruments of command, competition and communication.

Usage of Nudge in India

India is not too far behind. The Economic Survey 2018-19 talks in-depth about setting up a nudge unit in India. “Given our rich cultural and spiritual heritage, social norms play a very important role in shaping the behaviour of each one of us. Behavioural economics provides the necessary tools and principles to not only understand how norms affect behaviour but also to utilize these norms to effect behavioural change,” it says.

Programmes such as Swachh Bharat Mission, Jan Dhan Yojana and Beti Bachao Beti Padhao, provide testimony to the potential for behavioural change in India. Swachh Bharat Mission (SBM) has used ‘Prospect Theory’ extensively for driving behavioural change. Prospect Theory shows that people are loss averse, i.e. people will go greater lengths to avoid a perceived loss than obtaining a perceived benefit, even if the loss and benefit are of equal value so by highlighting the ill effects of poor sanitation and the number of deaths, SBM was able to impact the behaviours of millions. Another concept that has gained traction is ‘Social Proofing’. Studies show that making the actions of people more observable adds social pressure on people towards preferred behaviour. By making open defecation more ‘observable’ as unacceptable social behaviour, SBM could motivate more and more people to build toilets by applying social pressure. In four years of SBM, rural sanitation has gone up to 93% from only 38% and 2900 cities have declared themselves open defecation free.

There are many areas where nudge thinking may prove more effective—and potentially much more cost-effective than the carrots-and-sticks approach. Most state and local governments are just beginning to scratch the surface of this approach. Given the complexity of policies, participants can also be tempted to cut corners. In lieu of India’s questionable state capacity, the agencies can use nudges to boost compliance at little cost. Moreover, using nudges makes the policy more liberal in nature as it does not force the people to do a certain thing. Rather, it encourages and influences them to pursue or desist from certain actions by knowing how people think.

As we advocate for sound public policy making, nudging ensures liberty, i.e. people are free to do what they like and opt-out of undesirable arrangements if they want to. But at the same time, it also ensures paternalism, i.e. the policy influences people to make better choices for themselves as well as society.

In the coming years as people are increasingly realising the value of liberty, it would be immensely beneficial for the government to use the applications of behavioural economics and nudging to institute more effective public policies.