In my previous article, I discussed some basic concepts related to Interest Rates. Now, I thought it’s a good idea to look at what impact does artificial lowering of Interest Rates has on savings in general and why it is relevant to understand this.

To begin with, let’s try and define what savings are in the first place? One of the best definitions I have come across is; savings is deferred consumption – in other words, if one earns 100 Units of money in a given period of time and spends/consumes let’s say 60 Units towards living & other expense for that period, it means he/she saves the remaining 40 units (assuming no taxes for simplicity of discussion). So these saved 40 Units have latent economic energy stored in them – which can be unleashed at anytime as preferred by the saver. Put another way, saving allows the saver to spend or consume today’s earning out in the future at a time of his/her liking.

In fact, in the absence of savings no society or race can make any significant progress. Let me explain – if we consider primitive years of human race, it was like any other animal that lives today, i.e., the only function of humans was to survive one day at a time and make sure that the race continues to grow via reproduction with as many mates as possible (marriage as an institution was yet to be born then). Similar to what Tom Hanks experienced in Cast Away (minus the reproduction part of course :-)).

In such a society where everyone spends all their time, effort, skill and resource just to find food and live another day, i.e., they all live hand to mouth, have no means / ability to learn or specialize in anything else , they can never make any significant progress and will hence remain poor. And even if someone wanted to or has the ability to save something, it was very hard to do so, because at the time there was only barter system (i.e., one exchanges what he/she produces to what someone else produces and since most of the production happened to be consumables such as agricultural produce, dairy products, they could not be stored for long as they would perish soon) and money as a concept was yet to evolve. It was in fact the advent of the concept of money that lead to the birth of the concept called savings as we know it. (What lead to the advent of money is a separate topic of discussion in itself, best left for another day.)

In this context, it suffices to understand that money is a medium of exchange and an instrument which helps store economic energy for longer periods thus giving the owner of that money the opportunity to spend/invest at a later time. To summarise the discussion so far, money plays a vital role in saving – and saving is nothing but deferred consumption or deferred investment of choice.

People save for different reasons, but in general it is safe to consider that they save because they perceive a higher value for their money in the future relative to spending it in the present. The future event could be anything like personal emergency (umbrella for a rainy day), buying a car, house, children’s education, health, retirement, etc. However, all of this assumes that the money saved today will have higher value in the future than in the present; otherwise there is no motivation to save in the first place.

Figure: Savings – in an Austrian and a Keynesian world 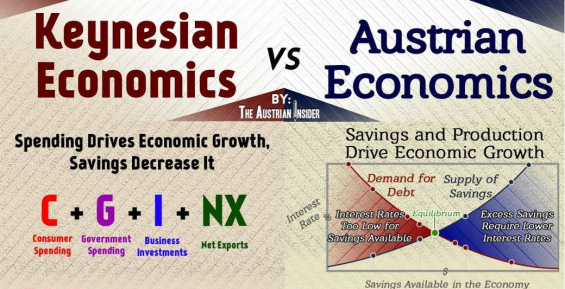 Put another way, discouraged savers as a result of lower rates now find it more rewarding to spend their money in the present than in the future. This is also observed to accompany higher levels of discretionary spending on things like having multiple vehicles, buying homes without sufficient saving, taking expensive vacations, to name a few. In general, one tends to consume more than needed leading to less saving and investing (also known as misallocation of capital resources by some Austrian Economists). When such an environment prolongs for longer periods of time, one tends to maintain such a lifestyle as it gives the illusion of prosperity by taking on debt (since the earnings can no longer support a lifestyle where one consumes more than one produces), and debt for most part acts like a claim on your future produce aka future income – since the debt has to be paid back from one’s future earnings. What this means is, by taking on debt one is borrowing prosperity from future and spending it in the present.

Also, those intending to save and invest as supposed to consume more regardless of the Interest rates, are now forced to get into more and more risky investments and asset classes to chase higher yields – since the regular saving instruments like saving accounts, fixed deposits, govt bonds give lesser and lesser real returns (Real returns = Nominal Interest Rates – Inflation). Thus making the normal saving and investing for the future all the more difficult and challenging.

Consequently, society as a whole saves lesser and lesser, thus becoming more vulnerable to future events like personal emergency, health, retirement to name a few, essentially making such a populace poorer in real terms. Hence, there is a strong case for higher real interest rates leading to higher levels of “saving – investment – growth”, as long as it reflects people’s time preferences.

– Vishwanath Gurlhosur is a Bangalore based entrepreneur who runs two companies – one is a tech products start-up (WizEngage) and the other a consulting and training firm. He is also a public speaker and conducts workshops on business skills across India. He holds key interest in the teachings – principles of the Austrian School of Economics and likes to call himself a “Hobby Economist!