How easy is it to start and conduct business in India? How does India fare in terms of economic freedom when compared to other economies? How competitive is India? How prosperous are Indians when compared to citizens of other countries? These and several other questions can be answered by looking at various indices and reports including the Ease of Doing Business report released every year by a number of organisations around the globe. A close study of their methodology also shows that these studies are thorough and detailed. So, let’s see how does India fare on some of these rankings.

A cursory look at the latest reports shows that over the last few years India has slipped on almost all of these rankings.

Of 185 countries covered in the 2013 Ease of Doing Business Report, India was ranked 173 in 2013, four places down from its ranking of 169 in 2012. The table below takes a closer look at various indicators covered in the report.

Of the 185 countries covered in the report, India ranked 184 on the indicator of enforcing contracts. Timor-Leste beat us to the honour of rank 185. While it’s difficult to believe such a bad state of affairs do exist, and the veracity of the report can itself be questioned, and even if we are too far off the mark set by the report, we can agree that there is a lot of scope for improvement. While the table above provides a snippet of what doing business in India means, it is worth going through them in greater detail.

Economic Freedom of the World Report published every year by the Canada based Fraser Institute ranked India at 111 amongst a total of 144 countries ranked in its 2012 report. What is worrying is that not only has India’s freedom ranking slipped among its peers, the level of economic freedom (measured on a scale of 10) has also come down. After peaking in 2005 with a score of 6.60, India has continuously slipped and scored 6.26 in 2010, the latest year for which the data is available (2012 report). The figure below shows how India has fared on the index since 1970. 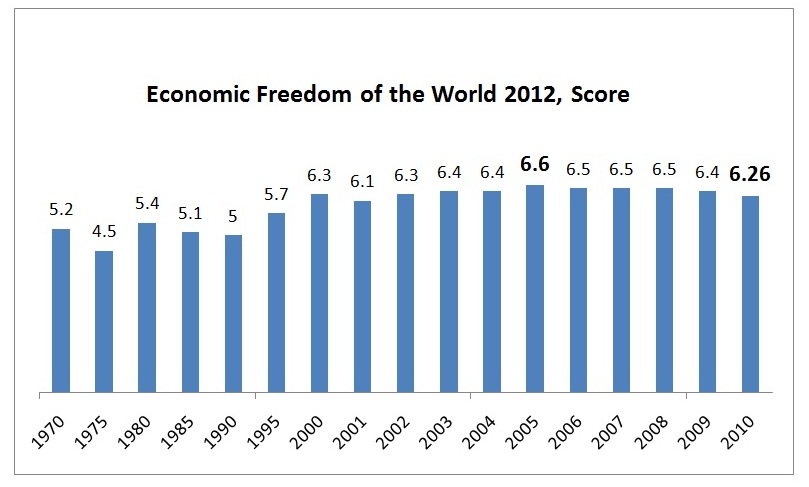 The figure shows that we are headed in the wrong direction. It is not just a coincidence that India’s growth rate in 2012-13 has also been the lowest in recent times.

The Global Competitiveness Report for 2012-13 published by the World Economic Forum ranks India at 59, three places down from last year. Once ranked ahead of Brazil and South Africa, India now trails them by some 10 places and lags behind China by a margin of 30 positions.

Another interesting index is Legatum Prosperity Index published by the Legatum Institute which measures wealth and well-being of a country based on some 91 odd indicators categorised into eight sub-indices – economy, entrepreneurship and opportunity, governance, education, health, safety and security, personal freedom and social capital. India stood at 101 amongst a total of 142 countries ranked in 2012.

While the findings of these reports may not be accurate, we can safely assume that all these reports and several others successfully shows that we are headed in the wrong direction, or at least we are not improving as fast as other countries. Doing business in India is not getting easier, we are not getting economically freer, our competitiveness is slipping, and all this is making us less prosperous when compared to our peers.

Looks like we have our task cut-out for us. Let’s get to it. Any and all ideas are welcome.