Home Governance Uttarakhand Floods – The Role of State in Rescue, Relief and Rehabilitation 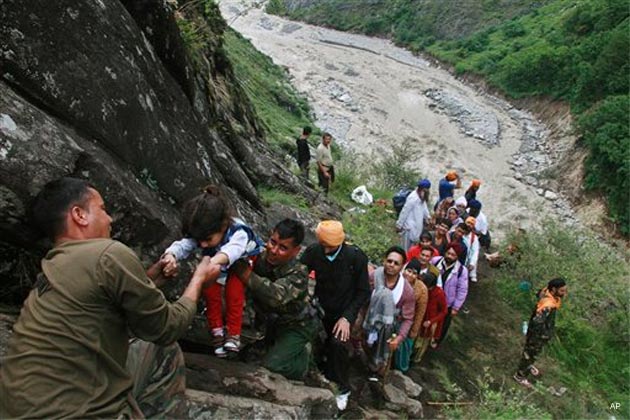 Rescue, relief and rehabilitation of those affected by the Uttarakhand flash floods is still in progress. While the efforts of state government have been criticised, efforts of armed forces have been lauded by various observers of the developments in Uttarakhand.

There could be two approaches in response to any disaster. First, how best to address the problem at hand of providing swift relief and rescue to those affected, and second, how can such an unfortunate event be avoided through policy actions if the cause is anthropogenic in nature. For the purpose of this post, we are limiting to addressing the first issue. That is, once the calamity is upon us, how best to address it.

Who is best suited to provide relief and rescue? It would occur to most that the government with enormous resources at its disposal is best placed to address such a calamity. There is merit in such belief. After all, it is hard to imagine private voluntary organisations mobilising hundreds of choppers and tens of thousands of trained professional on a short notice like the armed forces did in Uttarakhand flash floods last month. However, it is also important to tread carefully when looking up to a central government agency for solutions.

An interesting work that highlight the inherent deficiencies of a central disaster management agency has been done by Russell Sobel and Peter Leeson. In a policy analysis done for the Cato Institute, authors argue that federal government usually neither has the incentive nor the information needed to effectively coordinate relief management.

The authors have identified three problems in the delivery of disaster relief when conducted by a central government organisation: the problem of bureaucracy, the problem of coordination and the problem of adverse incentives.

As Sobel and Leeson demonstrate, result of the multiple layers of bureaucracy inherent to centralised decision-making is usually slow and delayed action. We do not have many accounts from Indian experience that critiques or lauds bureaucratic efficiency in times of emergency. However, it is quite likely that the bureaucratic processes that have been practiced for decades are not abandoned over-night. In such a scenario, it is again logical that more often than not decisions and orders flow from the top (minister or the top bureaucrat) to the bottom (those on the ground implementing those decisions made for them). This brings us to the next problem, the problem of coordination.

Drawing insights from the 1945 article ‘The Use of Knowledge in Society‘ by Nobel prize winning economist Frederich Hayek, the specific knowledge of circumstances which must be made use of (more so in times of emergency) never exists in concentrated or integrated form to be used by anyone in its totality. In fact, the dispersed bits of incomplete and frequently contradictory knowledge is possessed separately by different individuals. In his attempt to solve this problem, Hayek suggests that this problem must be solved by some form of decentralisation. Individuals with local knowledge and the ability to act on it must have a greater say in the decisions of rescue, relief and rehabilitation.

The knowledge of what relief supplies are needed, who needs them and who has the best means to meet those needs is necessarily dispersed. The issue then becomes, how best to utilise such dispersed knowledge. A case can be made that only the government has the resources to swiftly address a situation like the one being faced by Uttarakhand today. In such a scenario, maybe more authority and power to demand and deploy specific resources should be left to people on the ground implementing rescue and relief activities rather than directed from above.

(We are leaving ‘the problem of adverse incentives’ and the role of market (private profit-making organisations)and non-profit making charitable and community based solutions to be addressed in a separate post.)

India has a central organisation in National Disaster Management Authority (NDMA). It is not quite clear what role NDMA is performing in ongoing rescue and relief work in Uttarakhand. While the armed forces have come to take the lead in rescue and relief work, there are independent stories of people voluntarily providing the support to those in need (as documented here, here and here).

Who should provide the rescue and relief work? How should it be done? Can such an activity be incentivised? Is it immoral to charge disaster victims (exorbitant or not) for rescue and relief?  Is government the only one equipped to tackle such a situation? These are not easy questions to answer. However, Hayekian insights of knowledge problem, as developed and applied by Sobel and Leeson suggests that decentralisation of disaster relief and management is the preferred option. Also, the least the government can do is not get in the way of private voluntary efforts for relief, rescue and rehabilitation.

I invite you to share stories, articles, experiences and thoughts that can help illuminate the subject under discussion here.