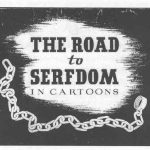 Instead of reading the entire book you can get a pretty good idea of its main arguments  by reading  the illustrated version of the Road to Serfdom published in Look Magazine later distributed by the general motors.

Even though Wikipedia isn’t the most reliable  resource it gives a good overview of the book. According to this resource – for Hayek this book talks of how “the road to serfdom” inadvertently set upon by central planning, with its dismantling of the free market system, ends in the destruction of all individual economic and personal freedom. Hayek’s central thesis is that all forms of collectivism tend towards tyranny, and he used the Soviet Union and Nazi Germany as examples of countries which had gone down “the road to serfdom” and reached tyranny.