Home Economy Economics Through a Song of Ice and Fire: Tyrion’s Specialisation 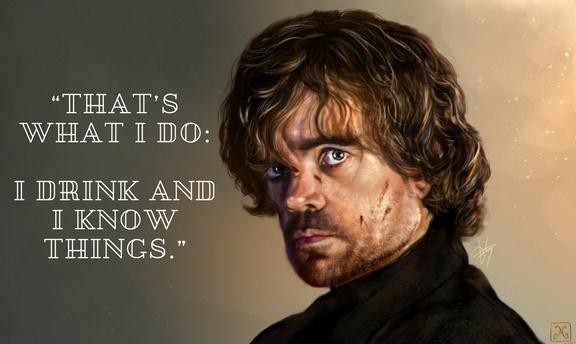 Game of Thrones (GoT) is not just a fascinating fantasy fiction about the iron throne and the politics around it, but it is also a great insight into different theories of human nature, social psychology, international relations, diplomacy as well as the various theories and concepts of economics.

Every episode and every character tells us something about the real world, and there is a lesson to be learned from the wise words of all the characters. One such character, not to mention the most beloved ones, is Tyrion Lannister. I doubt there is any GoT fan who doesn’t like the sharp-tongued dwarf. He is man of substance, honour, and morality, and most importantly, understands the concept of specialisation.

Tyrion is not built for battle. He’s neither nimble with his feet nor quick with a sword. But what he is good at, and I quote, “That’s what I do: I drink and I know things”.

He specialises in strategy and warfare. He reads, learns new things, is well-versed in the history of different dynasties and rulers, as well as the past and the present of rulers (and of course, an expert at how to charm the ladies).

Of course, he wasn’t born with all these capacities and capabilities. He trained himself to be this person. He knew that being a dwarf has no real meaning in this barbaric world, and so he must find a skill that qualifies as his comparative advantage, that sets him apart and makes him useful. He has freed himself from so many difficult situations, from almost being killed, to becoming the King’s (and now the Queen’s) hand. His intelligence also earned him the friendship and trust of people in not just his own country but in the farthest north, and the land of the free folk, as well. In this regard we can say that his greatest wealth is his mind and not the gold or the army.

The Extent of Specialisation and Division of Labour

The father of Economics, Adam Smith realises the value of specialisation and explains the same in 1776 book “An Inquiry into the Nature and Causes of the Wealth of Nations”.

Smith begins by noting: “The greatest improvement in the productive powers of labour . . . seem[s] to be the effects of the division of labour.” He discusses the importance and value of specialisation, and/or the division of labour, by considering the advantage of having each worker in a pin factory concentrate on a particular step in production rather than producing a pin from beginning to end. Through specialisation, workers can become more skillful, use machinery that increases their productive powers, and avoid any loss of time.

According to Smith, ten pin-makers, by specialising in different tasks, can produce about forty eight thousand pins a day. Whereas if each one tries to perform every task in pin production, they could produce maybe twenty pins a day. The productivity gained and value generated by division of labour is immense.

Once labour starts to specialise in a particular skill, the industry then expand their market. If we continue with the same pin example we will realise that now the industry as a whole can produce forty eight thousand pins a day, which basically means there’s lot more for people to consume in one geographic area. What happens when people in that area no longer need pins (or in other words, if the market is saturated)? They will start exporting pins. What would that do in return? It will build the brands of pin industry and increase the market valuation. Also, this provides signals to the market about the increase in demand of steel, and other related products, and in return market will react with the necessary steps by providing more and more goods and services, and further more specialisation of other industries.

The Power of Specialisation

The theory of comparative advantage states that people/industry should focus on what is unique to them respectively or if they could provide the solution to problems that the economy is facing and hence they must specialise in producing those goods and ensuring that they have a lower opportunity cost.

Let’s take an example of doctors to understand the degree of specialisation. Dr. A. G. K. Gokhale is an Indian Cardiac Surgeon at Yashoda Hospitals, Secunderabad. He is known for being the first to perform a successful human-to-human heart transplant and first successful lung transplant in the state of Andhra Pradesh. There are always patients waiting for him, to the extent, that he also has patients from around the world. This, of course, was made possible because he specialised in Heart Surgery which, in turn, made him the most valued in the health sector.

It is because of the same specialisation and comparative advantage that Punjab and Madhya Pradesh supply grains and food items to the entire nation, also export across borders. They realised that their climatic condition is better than any other states and hence, why not focus on farming instead of something else. On the other hand Bangalore, Gurgaon, Noida or Mumbai aren’t suitable for farming and hence they specialise in industries and trading.

But of course, all this is possible with free and open markets which also helps in better network and connectivity between two states/countries. Tyrion understands this. He’s been able to build peace with Lannisters, Starks, Tyrells and Targaryens — by offering them his services. His family history and background become irrelevant because the service he provides in terms of his wisdom and strategising is far greater than the opportunity cost of discriminating against him for having the Lannister’s trademark golden hair.

A free and fair market brings about a merit-based system which creates more multicultural and global harmony than any government program or ministry. It is the cooperation and specialisation that enables the creation of wealth, the creation of peace and prosperity and this is the morality of market.