Over the last few years, Prime Minister Narendra Modi has often promised that his administration is working towards doubling farmers’ income by 2022. With that promise, the government has increased the minimum support prices and has taken multiple initiatives, including the PM Kisan Yojana under which the government provides ₹6,000 income support per year to farmers.

However, the government is missing out on a simple solution – letting the farmers sell their products at the best available prices in the market of their choice. The Indian government is probably one of the most generous governments in the world when it comes to farmers. For seven decades, the central and state governments have provided generous subsidies, loan waivers, minimum support prices, tax breaks, free water and electricity, along with numerous other benefits. Why then are the farmers still among the poorest in the country?

The answer is simple; farmers are poor because the government has taken away their right to sell their produce in the market of their choice. In the domestic market, this happens via laws on Agriculture Produce Marketing Committees, which force the farmers to sell their produce only in the designated mandis. This means that farmers cannot sell to the consumers or to an unauthorised agent on remunerative prices. The situation is so bad that sometimes farmers are paid 10 or 20 times less price at these mandis than the prevailing retail prices.

In the international market, the government of India outright bans selling many agricultural products and even when it allows, there are unpredictable and continuous interventions by bureaucrats. For example, take the selling of onions, as soon as some farmers started making profits due to the high prices of onions, the government banned its exports and hastily imported onions from neighbouring countries. If the government is keen on doubling farmers’ income, why did it not let them earn from higher onion prices?

An OECD study in 2018 found that the ban on exports of many commodities, combined with other restrictions led to an average annual loss of 6.2 per cent income from 2014-16. Imagine that, for all the support the government claims to provide farmers, it stole 6.2 per cent of their earnings. Over the years, this amount has added up to hundreds of billions of dollars in lost wealth for our farmers.

While the generosity towards the farmers is seen among politicians of all hues and colours regularly, the governments’ suppression of their income is not so commonly known, and our leaders conveniently ignore it. Although India spends around $30bn a year on direct aid to agriculture, it also deprives farmers of $40bn of income, given the difference between international and domestic prices of crops.

The situation has remained the same for decades. In 2001, a Task Force on Agriculture headed by Sharad Joshi found that farmers were provided with a negative subsidy of ₹3,00,000 crore from 1980 to 2000 due to various government interventions and limits on access to international markets.

If the government sincerely about doubling farmers’ income, it should simply let them sell in the market of their choice on their own terms.

Read More: Farmers, Middlemen and the Way Out 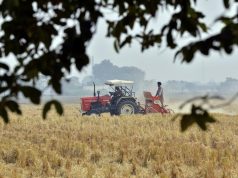