What does Baba Ramdev have in common with Supreme Court judges? One, both wear robes (albeit of different colors), and two, both believe that ad hoc interference in governance can help salvage India from the malice of graft. Moral ablution – whether it be from the Judiciary or Mr. Ramdev – will not dent corruption, only economic freedom can. Corruption is an economic phenomenon, and the emperors are without robes.

The good news is that we’ve data ranking nearly 180 countries on both corruption and economic freedom. Since 1998 Transparency International measures the “degree to which public sector corruption is perceived to exist”. And since 1995 the Heritage Foundation has been ranking countries according to their “economic freedom” as measured by ten benchmarks including business freedom, trade freedom, and property rights. 5 of the 10 least corrupt countries are also amongst the 10 most economically free countries: Singapore, Australia, New Zealand, Canada and Denmark. The 10 least corrupt countries have an average economic freedom index rank of 11, while the average for 10 most corrupt countries is 163! The relationship holds true the other way around as well. The 10 most economically free countries have an average rank of 12 while the 10 least free countries have an average rank of 139 on corruption index.

Stanley Jevons – 19th century economist – discovered that there is a statistical relation between sunspots and business cycles, and claimed that sunspots caused business cycles. The idea was received with much ridicule, so much so that a fellow economist published a mock-paper on sunspots and boat races! The relation between economic freedom and corruption is no sunspot economics though, there is sound theory. The Public Choice School of Economics tells us that politicians and bureaucrats are self-interested agents, who are likely exploit profit making opportunities. Low economic freedom corresponds to extensive government intervention in the form of licenses, permits and quotas (LPQ). Profit-maximizing politicians use LPQ levers to extract rents from businesses and consumers. Mr. Ramdev’s hunger-strike and the judiciary’s activism does nothing to decrease LPQ levers. 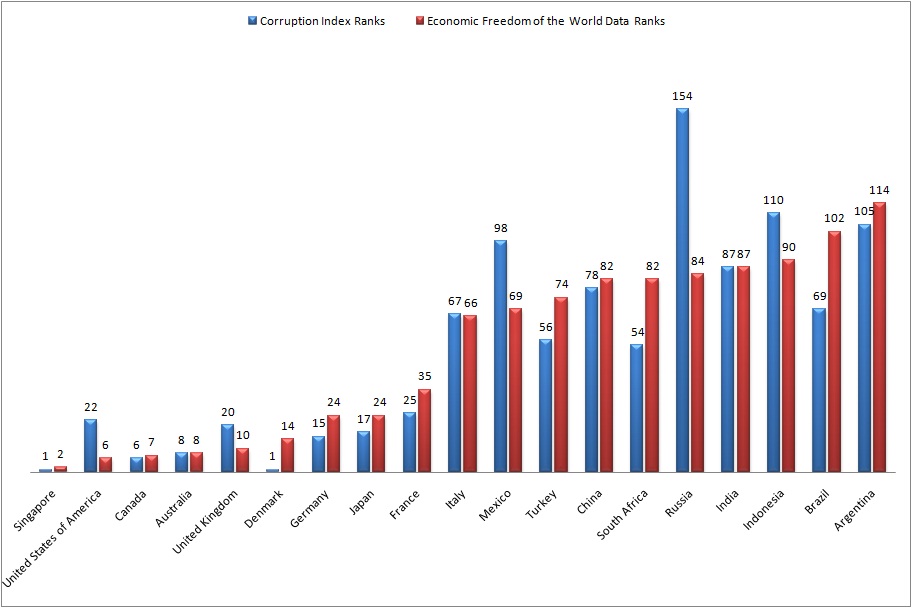 * Figures are from the Fraser Institute