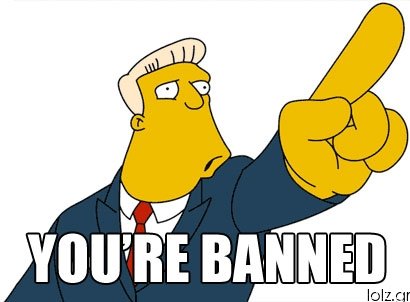 Picture this: You are sharing your room with someone who is probably your best friend by the day, but by the night s/he is the most evil person…because your friend snores a lot at night. Here is the solution: BAN. I wear colourful and funky socks which might have some chances of affecting someone’s vision.The solution is to BAN colourful socks. One of my colleagues talks very loudly, it is harmful for my eardrums. The solution is: BAN talking loudly. Having a lot of sugar products can cause diabetes. The solution: BAN sugar.

You can say “but that is absurd, if you have a problem don’t eat sugar, or get a medical check up of your friend who snores!”. But wait a second, we are living in a country where if you have power and if you think that banning is the solution then probably you can!

In the recent era we have been told (or rather, instructed) what to say and what not to say, whom to have sex with and whom not to, whom to marry, what to eat, when to drink and smoke and chew, what kind of movies to watch, what to read, how to dress and when to go out. Let us explore few of these BANS one by one.

What to Eat: As a disclaimer, I don’t eat red meat. Does that mean I should impose my views on others? A lot of people have talked about sentiments related with the eating of beef—in so far as it hurts the sentiments of those whose religion forbids it. Then what about the sentiments and preference of those who actually consume it? Another argument could be (probably from the extremist), India is a Hindu nation but the last time I checked our constitution, it clearly said we are a secular nation and that, in my opinion, means a nation without an official religion.

Economically speaking, we have an abundance of something because there is some value in sustaining it. Chicken could be a good example. We consume a lot of chicken meat or eggs and hence it is valuable to have farm and grow this as business, whereas, as a recent article by Harish Damodaran shows, in majority of India, farmers own a lot of cattle, they usually milk the cow till they stop producing more and they become useless after a point. Even if the farmer may not slaughter or eat buffalo meat himself, so long as others do, it at least guarantees a resale value for the animal. If there is no value in sustaining it, (as the beef ban has done), the farmer has no incentive to keep the cow healthy and thriving, but simply to abandon it once it is no longer useful.

Censorship: What to watch/read: I was recently watching Fear Factor (Indian version) and Fast & Furious 7 which purposefully censored “THE WORDS” (I’ll avoid using them here in case I’m asked to censor this blog). I was curious as to what purpose censoring serves anyway. It doesn’t stop me being aware of abusive language. The hypocrisy is that censorship is only for the common people and not for people in authority because as we see they are able to speak uninhibited. Telling us what books we should read, what movies we should we watch isn’t the government’s job. And why should it be anway, what is the purpose? Banning AIB Roast, India’s Daughter, Fifty Shades of Grey or books like The Satanic Verses or Madhorubhagan hasn’t stopped people watching the movies or reading the books (Piracy, zindabad!). Movies or books derive their content from society, they depict a certain kind of society and banning them showcases one’s ostrich behaviour. Also, it restricts how much information we as a public have access to—why should the government decide what we get to know?

The main problem with bans and regulation is that it presupposes predictability in human behaviour. Human beings aren’t pawns on a chess board, they have got their own minds and capacity to think for themselves, their own dreams and desires. Free markets, spontaneous order and voluntary exchange lead to a society where they are able to exercise their minds and make their own choices. What we need are simple rules and equations and not interventions after interventions.

A long time back a great hero of the world, Adolf Hitler said “The best way to take control over a people and control them utterly is to take a little of their freedom at a time, to erode rights by a thousand tiny and almost imperceptible reductions. In this way, the people will not see those rights and freedoms being removed until past the point at which these changes cannot be reversed.”

We can follow him, or we can follow F A Hayek “To act on the belief that we possess the knowledge and the power which enable us to shape the processes of society entirely to our liking, knowledge which in fact we do not possess, is likely to make us do much harm.”

The choice is yours… or should I tell you whom to follow?

For fun, here’s a video on India’s slew of bans.