Home Healthcare Atmanirbharta comes in through knocking on the pandemic door 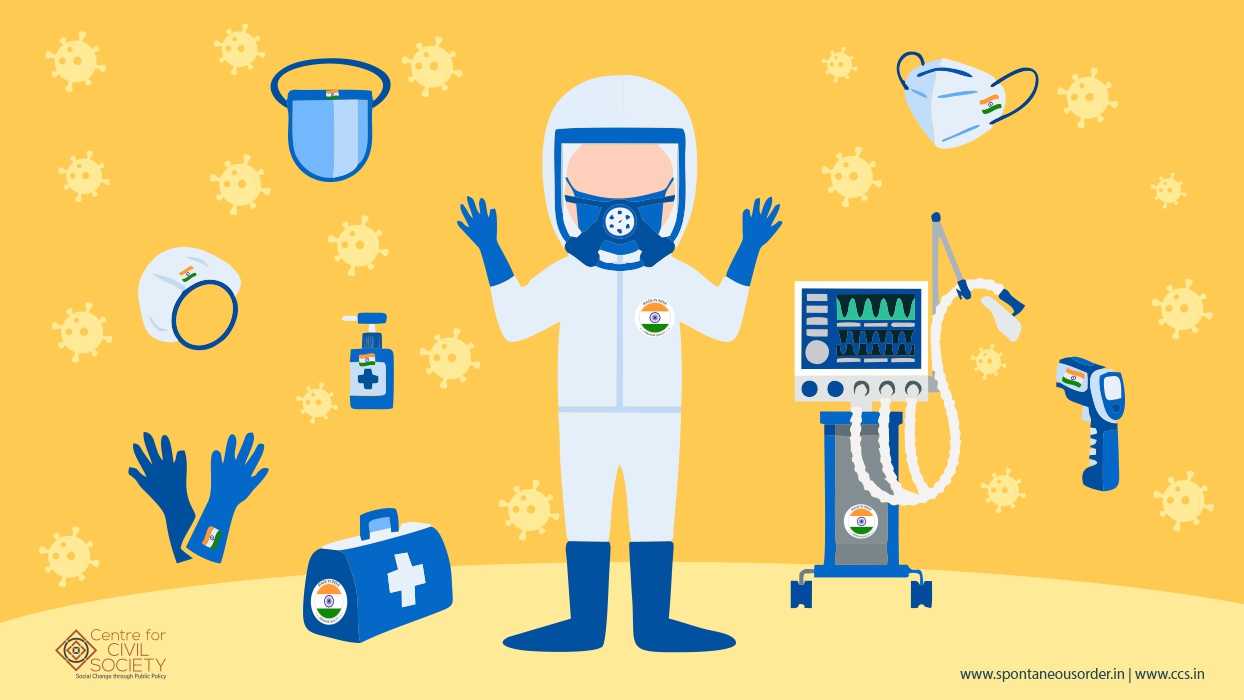 Which sector of the economy is witnessing the deepest impact of Prime Minister Narendra Modi’s clarion call for atmanirbharta or self-reliance? It is a good question to ask.

While industry experts are still grappling with the meaning of self-reliance in an Indian eco-system ravaged by the pandemic and before that by exceedingly poor growth rate, there are some clues blowing in the wind – clues that are intimately connected to the rampaging pandemic in the country.

Even as Coronavirus is slowly but steadily pushing India higher on the list of most-affected nations, there is an upside to this medical emergency. The pandemic has spawned a gigantic parallel cottage industry, manufacturing a variety of anti-COVID gear. Before the viral swept in, there was no production facility for personal protective equipment (PPEs) and N-95 masks. What existed were small units that assembled ventilators and testing kits.

How times have changed. There are currently more than 1,000 firms on the government list that are producing PPE kits. The list of private producers, those that are not recognised by the government, are a handful as well, but their details are sketchy.

In addition to the government list, several other companies, of varying shapes and sizes, are manufacturing gloves, masks, ventilators, swabs, sanitisers and RNA extraction kits, since Coronavirus was declared a pandemic in March 2020.

Therefore, from a scenario of acute shortages in the middle of March 2020, India has grown to have an oversupply glut with huge increase in manufacturing, compounded by imports flooding the markets at nil import duties. To add to their woes, manufacturers are unable to export their surplus capacity due to the continued ban on exports, says Rajiv Nath, Forum Coordinator, Association of Indian Medical Device Industry, who also works closely with the Government of India’s Department of Pharmaceuticals.

Now comes the spirit of atmanirbharta. Jumping on this bandwagon with a flourish are companies that have nothing to do with either health or wellness. True to the spirit of Swadeshi – and of quick thinking and innovation – they include footwear firms, hosiery manufactures, textile mills, exporters, boutique shop owners, dealers in apparels, ordnance clothing, polythene bag makers – you name it and they are there.

To meet the rapid and non-stop increase in Coronavirus positive cases, the government has pulled out all stops, easing manufacturing regulations like never before, demonstrating that if atmanirbhrata or self-reliance has to be taken to its logical conclusion, then privatisation will have to be embraced wholeheartedly. Cussed protectionism will simply not do.

Resultantly, companies have been awarded contracts, accorded through the single window with a speed that is astonishing, with the Ministry of Defence’s (MoD) public sector units (PSUs) and departments acting as the nodal agencies.

In addition to this list, are another 358 firms, which are manufacturing PPE Body Coveralls under the supervision of the Defence and Research Development Organisation (DRDO). Coveralls are a PPE item designed to protect the body and other clothing against dirt or outside contaminants.

The speed has fetched dividends. Today there are 2 lakh PPE kits and coveralls being churned out daily by this new assembly line production, as per the specifications of the Ministry of Health and Family Welfare. In addition, roughly the same number is being produced daily by other manufacturers and suppliers to state governments, autonomous institutes and private healthcare.

Testing the quality of material at different stages of processing, from fibre to fabric and evaluation of processing performance by the application of physical, chemical and processing tests, have been assigned to the South India Textile Research Association or SITRA for all important quality characteristics.

“PPE production capacity has increased so much that it has become a Rs 7,000-crore industry in India, the biggest after China,” PD Vaghela, Union Secretary in the Department of Pharmaceuticals and Chairman of one of the 11 empowered groups constituted for planning and ensuring implementation of response to the disease outbreak, told a media conference.

The vagaries of self-reliance are also evident. The PPEs being manufactured include all varieties – from high quality to downright sub-standard and shoddy, supplied in accordance with the budget. It proves that while self-reliance is a great catchword, the nuances it represents are far too subtle to be painted by one single brush.

In an interview to this writer, Rajiv Nath explains the pitfalls of self-reliance. “The new manufacturers are yet to appreciate quality and go through the learning curve of understanding the medical usage needed for critical requirements. Many of them, instead of learning deployment of quality management systems to become globally competitive, are resorting to short cuts by buying fake proofs from certification bodies that are not National Accreditation Board for Certification Bodies (NABCB) or International Accreditation Forum (IAF)-authorised and are armed with dubious claims of endorsements from private bodies.”

But if PPEs constitute a safeguard for frontline COVID warriors, the pressing need for other paraphernalia deemed mandatory, has created another segment in this cottage industry, which is doing booming business. The massive demand for masks, gloves, sanitisers and ventilators is never-ending. The atmanirbhar producers have proved to be equal to the task.

** According to the Association of Indian Medical Device Industry (AIMED), before the outbreak of the virus, there were 20 companies making gloves, as compared to 30 today. From 211 crore pieces per annum, the production today stands at 247.78 crore per annum.

** There were no specialist goggles manufactures; now there are 17. From zero production at the start of the year, the goggles production count has zoomed up to 2.08 crore pieces per annum!

** From five N-95 mask makers at the start of the year producing 1.38 crore pieces per annum, the number has climbed up to 36 producers churning out 79.92 crore pieces of masks per annum.

*** There are five swabs manufacturers compared to none a few months ago. From no production, the number is now pegged at 37.6 crore pieces per annum.

“This is a positive development and the impact of COVID-19 is that jobs have been created around the provision of these essential supplies. I hope that this trend continues,” Director of the Washington-based Center for Disease Dynamics, Economics and Policy and Senior Research Scholar and Lecturer at Princeton University, Ramanan Laxminarayan, told this writer in an interview.

By no chance either, is this list of cottage industries a final one. According to industry insiders, “this list is a dynamic one, which changes every two weeks.” Looks like atmanirbharta as a concept is here to stay.