Alex the Lion: The wild? Are you nuts? That is the worst idea I have ever heard!

Marty the Zebra: The penguins are going, so why can’t I?

Alex the Lion: Because the penguins are psychotic

Psychotic maybe, but certainly on a backpacking trip is this Emperor Penguin. Travelling more than 2000 miles, a lost black and white stranger has been around Peka Peka Beach, New Zealand. The curious Emperor Penguin apparently got diverted from its path and rather than ending up in South America, where Emperor penguins are sighted regularly, landed on the other side of the map.

The world’s largest penguin species has garnered much attention. In the ‘Global Village’ of news we reside in, a wrong turn has made ‘Happy Feet’, the name which we have fondly assigned to him, the talk of the World. But it seems impossible to look at the photos of this penguin and get angry!

So, how and why did this lost penguin land up in New Zealand?  The scientific community has been prompt to say it probably swam its way into unknown territory (YES, Penguins cannot fly). But warnings have been out about the shift in migratory patterns of penguins. Some worry that offshore oil exploration and drilling platforms will interfere with the penguins. Migratory routes and patterns are important to map because of man’s demand for oil that can be drilled offshore. There is now a question as to whether this particular instance should be taken as a signaling to a larger cause of worry.

Usually, every year, Emperor Penguins make an unprecedented journey through the harshest climatic conditions on earth to mate (a matter we discuss in greater detail in the to be soon published ‘The Difficulty of Being a Penguin and Other Bed Time Stories’). So far no penguin has completed a full migration without stopping. National Geographic’s fabulous documentary, March of the Penguins captures the beauty of this journey in an exceptional manner.

What the New Zealand Government has to say is interesting. With the inflow of locals and news cameras, the government has decided to let nature take its course. No rehabilitation for happy feet. For the time being, wildlife experts have transported ‘Happy Feet’ to Wellington Zoo.

However, its condition soon deteriorated, the penguin has undergone two surgeries in order to remove sand from its stomach.

Then again, we humans shouldn’t be talking, or writing, or even reading about lost penguins. We ain’t much better at directions! The concept of taking wrong turns and landing up in unchartered territory is not a new one. Take Franklin Huanaco for instance, fellow ran away from home in Bolivia hoping to be reunited with his mother but ended up in neighboring Chile.

Moral of the story? Go out there, take the wrong turns. You never know where you’ll end up, but you’ll definitely remember the journey! Hope Mr. Happy Feet is reading this. 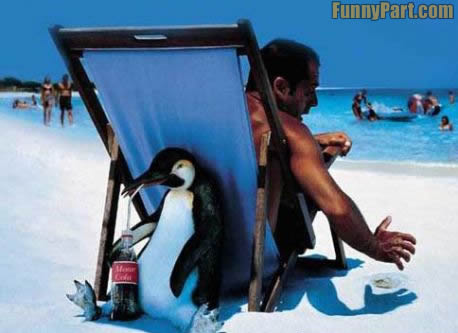